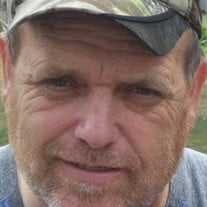 Batavia - William J. Marble, 54, of Batavia, passed away Wednesday, (November 27, 2013) at Hildebrandt Hospice Care Center, in Rochester, following a brief illness. Mr. Marble was born April 13, 1959 in Batavia, a son of Salvatrice (Maccarrella) Marble of Nunda and late Darwin Marble. Bill was a true outdoors man. He greatly enjoyed hunting, fishing, and most other outdoor activities. He liked going on family vacations and loved horse racing. Nothing compares to the love he had for his grandchildren. They were his world. He is the husband of Julie (Lang) Marble, of Batavia, whom he married October 9, 2004 in East Pembroke. Surviving along with his wife and mother are his children, Allison (Michael Benstead) Marble, Janelle (Jake Wagner) Marble, Ashley Marble all of Batavia, Matthew (Dennille) Marble of Indian Falls, and Zachary Marble of Batavia; grandchildren, Gavin and Griffin Wagner, and Kelsie and Jeffrey Benstead; siblings, James (Sylvia) Marble, Steve (Vicki) Marble both of Nunda, and Darla (James) Luttrell of Batavia. Several aunts, uncles, nieces, nephews, and cousins also survive. Bill is preceded in death by a son, Adam Marble. Friends may call on Monday from 4 to 8 p.m. at H.E. Turner & Co. Funeral Home, 403 East Main Street, Batavia, where Bill's Funeral Service will be at 10:00 a.m., Tuesday, (December 3, 2013). In lieu of flowers, memorials may be made to Hildebrandt Hospice Care Center, 2652 Ridgeway Avenue, Rochester, NY 14626. He will be laid to rest in Evergreen Hill Cemetery, Corfu.

The family of William Marble created this Life Tributes page to make it easy to share your memories.

Send flowers to the Marble family.