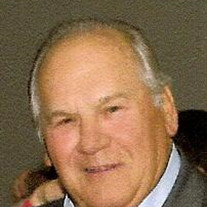 Batavia - Mr. William T. Ferrando, Sr., 68, of Batavia, construction worker for Local 435 in Rochester for 24 years, died Thursday, January 3, 2013 at United Memorial Medical Center, following a brief illness. Mr. Ferrando was born May 23, 1944 in Buffalo, a son of the late Joseph Sr. and Helen Kijanka Ferrando. A faithful member of St. Anthony's Church, he attended Mass weekly and was a member of St. Michael's Society. An avid golfer and bowler, he will be remembered as a hardworking family man who loved his grandchildren and attending their sporting events. A veteran, he served with the United State Marine Corps during the Vietnam War. He was a member of the VFW Post No. 1602 in Batavia and St. Nicholas Club. He is survived by his wife of 45 years, Jane Bachulak Ferrando; a son, William F. (Stacy) Ferrando, Jr. of Batavia; two daughters, Christina (Bruce) Wright of Alexander and Melissa (Dennis) Ryan of Oakfield; six grandchildren, Kelsey and Jayna Wright, Trent and Caitlin Ryan and Benjamin and Peyton Ferrando; a brother, Joseph (Diana) Ferrando, Jr. of LeRoy; two sisters, Rosemary (Martin, Sr.) Whelan of Linden and Patricia (Tom) Brade of Batavia; an uncle, Anthony Kijonka of Florida and several nieces, nephews and cousins. Friends may call on Sunday from 4 to 8 p.m. at the Bohm-Calarco-Smith Funeral Home, 308 East Main Street, Batavia. His Mass of Christian Burial will be held on Monday at 10 a.m. at Ascension Parish - St. Anthony's Church, 122 Liberty Street, Batavia. Burial will be in St. Joseph's Cemetery. In lieu of flowers, please consider memorials to the Arthritis Foundation, P.O. Box 96280, Washington, DC 20077 or online at www.arthritis.org.

The family of William Ferrando created this Life Tributes page to make it easy to share your memories.

Send flowers to the Ferrando family.