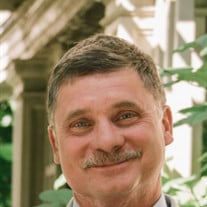 William (‘Bill’ ’Bongo’) Barton - age 63, of Silver Springs, NY, went home to be with his Lord & Savior, Jesus Christ on the morning of Wednesday, October 14, 2020. He was surrounded by his loving family at his home on Silver Lake, after a courageous 13-year long battle against multiple myeloma. Bill was born in Batavia on March 12, 1957 to Charles and Nancy Barton. Bill was preceded in death by his parents, brother Bob, father-in-law Ralph Houseknecht, brother-in-law Edward Houseknecht, and nephew Michael Houseknecht. Bill is survived by his wife of 37 years, Mary Kay (Houseknecht) Barton; their children, Will (Catherine) Barton of Osprey, FL, and Paul (Jessica) Barton of Batavia, NY; his grandchildren: Luke, Connor and Cole; his siblings: Dave Barton of Las Vegas NV, Pam Barton of Coronado CA, and Sue Barton of Latrobe PA. Bill is also survived by his “2nd mother,” Agnes Houseknecht of Stafford NY, and Mary Kay’s siblings - Greg of Batavia NY, Buddy (Kate) of Bonita Springs FL, Tom (Lynn) of Batavia NY, Tim (Sue) of Interlaken NY, John (Kimberly) of Wyoming NY, and Katie Berger (Gary) of Stafford NY. He is also survived by many beloved nieces and nephews, as well as their spouses and children. Bill graduated from Batavia High School in 1976. He loved sports, excelling in football and basketball in school. In his later years, he spent time at the YMCA, where he was passionate about weightlifting with his buddy, ‘Moose’ Pastore. Bill worked in the skilled trades until marrying Mary Kay in 1983 at St. Mary’s Church in Batavia, after which he began his career at Pepsi-Cola and Loose Ends Vending. Bill worked relentlessly. His belief that he could not ask people to do something he was not willing to do himself endeared him to his employees/co-workers during his years at Pepsi and Loose Ends. Bill always credited his success to all the dedicated employees at Pepsi and Loose Ends who were like family, especially his secretary Gail Hull. Any hard worker he met instantly became a friend. Even greater than Bill’s love for a solid work ethic, Bill loved to help people. He was truly selfless. Even in his last days, Bill was most concerned about inconveniencing his family as they cared for him. He was also persistent about silly things like changing the lower unit oil in the boat engine and explaining the process of winterizing the plumbing in the house to his boys so ‘Mom wouldn’t have to worry about it.’ Bill was unwavering in his strength of character. He was a rock. Bill’s pride and joy was always his family. Some of Bill’s favorite memories included time spent watching hockey at the Batavia ‘Royal Rink,’ cheering on his boys and their friends on the Ramparts and Ice Devils. Bill also loved fishing and hunting with his sons and good friends – especially Mike McNally - teaching his sons how to water ski at Silver Lake, and sharing good times and laughs with all their family, friends and neighbors around a roaring campfire. Bill’s happiest moment was the day he and his wife, Mary Kay were baptized at East Shelby Community Bible Church – affirming their love and belief in Jesus Christ. Bill took every opportunity to share his faith in Jesus with all the people he met on his journey through cancer. He credited the Holy Spirit with divine intervention in removing all his fear as he was on the way to receiving his diagnosis in 2007. Bill shared that miraculous story with everyone he encountered. Bill’s resolute faith allowed him to face his mortality entirely absent of fear, something he prayed will happen for everyone. A Celebration of Life will be held Saturday, October 17th at 11:00 AM at East Shelby Community Bible Church, located at 5278 East Shelby Road, Medina, NY 14103. Immediate family and close friends will be allowed inside the church. The service will also be broadcast in the church parking lot over the radio (as has been the practice through the coronavirus), and live streamed on East Shelby Bible Church’s Facebook page for those who are unable to attend in person. In lieu of flowers, the family requests that donations in Bill’s honor be made to any of the following organizations: Leukemia & Lymphoma Society (lls.org), ARC of Genesee County (www.arcgo.org/donate), Samaritan’s Purse (www.samaritanspurse.org/), Ricky Palermo Foundation (www.rickypalermofoundation.org). To leave a condolence, share a story, or light a candle, please visit www.bataviafuneralhomes.com. Arrangements have been entrusted to the H.E. Turner & Co. Funeral Home of Batavia.

The family of Mr. William D. Barton created this Life Tributes page to make it easy to share your memories.

Send flowers to the Barton family.