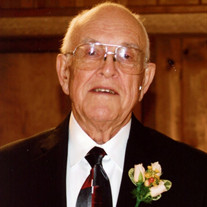 BERGEN — Willard Pengelly, 98, passed away peacefully at home on Tuesday, June 16, in Bergen, New York.  Willard was born December 1, 1921, in Churchville, New York a son of William and Grace Pengelly.  He was preceded in death by his parents, brother Gordon, and three wives (Edith Brisbane, Evelyn Sorce, and Theresa Martin-Alexander). Survived by his daughter, Martha Montgomery of Bergen, New York and son David (Suzanne) Pengelly of Senoia, Georgia.  He also is survived by three grandchildren: Marc (Rebecca) Montgomery, Kerry (David) Vaden, and Shannon (Rebecca) Pengelly, five great-grandchildren, Ashley and Dillon Montgomery, Emily and Andrew Vaden and Emyrs Pengelly, and many step children.  Willard was a very successful farmer and real estate broker who worked with Harris Wilcox Inc. for almost sixty years.  He was the past president of the New York State Holstein Association and New York State Guernsey Association. His passion was connecting with people through a common love of farming and real estate.  He continued to advise on real estate matters until the age of 97.  He was a father figure to many and will be remembered by his family and friends as a smart, kind, gentle and friendly person with a sparkle in his eye and will be missed.  There will be no visitation. Due to the ongoing COVID-19 pandemic, private services were held by the family.  He was laid to rest in Stone Church Cemetery, Bergen.  A memorial service will be scheduled in the future for Willard at Bergen Presbyterian Evangelical Church.  In lieu of flowers, he would rather have you remember him by donating directly to the Bergen Presbyterian Evangelical Church, P.O. Box 206, Bergen, New York 14416.

BERGEN &#8212; Willard Pengelly, 98, passed away peacefully at home on Tuesday, June 16, in Bergen, New York.  Willard was born December 1, 1921, in Churchville, New York a son of William and Grace Pengelly.  He was preceded in death by his... View Obituary & Service Information

The family of Willard H. Pengelly created this Life Tributes page to make it easy to share your memories.

Send flowers to the Pengelly family.