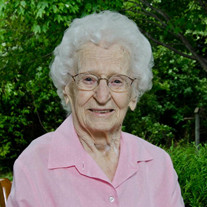 Batavia - Mrs. Viola Bertha Hale, 96, of Batavia, died Tuesday, September 11, 2012 at her home in Batavia surrounded by her loving family. Mrs. Hale was born May 30, 1916 in Bennington, a daughter of the late John and Flossie Harvey Bartz. An active member of Batavia Assembly of God Church, Mrs. Hale served with the Women's Ministry and actively supported the missionaries of the church. She loved to knit and crochet making blankets for the veteran's hospital, various nursing homes and knitted blankets and hats for newborn babies on the maternity ward at the former Genesee Memorial Hospital. She worked for the DuPont plant in Seaford, Delaware during World War II. She returned back to Batavia in 1951, retiring from GTE Sylvania in 1974 after 20 years. Following her retirement she worked at the Daily News from 1985-1992 and then again from 1998-2008. She is predeceased by her husbands, Mervin Shattuck who died in 1962 and Lyman Hale who died in 1998. She is survived by three daughters, Marion (late Roger) Watkins and Ruth (Arnold) Johnson, both of Farmers Branch, Texas and Pauline (David) Crossett of Batavia; a son-in-law, Clarence Johnson of Batavia; four brothers, John Bartz of Avon, Francis (Alice) Bartz of Alexander, Henry (Jane) Bartz of Batavia and Harvey (Laurie) Bartz of Elba; three sisters, Elizabeth Heale and Bertha Gage, both of Batavia and Julia Wallace of Auburn; 18 grandchildren, 31 great-grandchildren, 2 great-great-grandchildren, several nieces, nephews, great-nieces and great nephews. She is the mother of the late Betty Jane Johnson who died August 23, 2012 and sister of the late Albert, Robert, William and Mabel Bartz and James Heale. There will be no calling hours, but rather a simple family gathering. Memorials may be made to the Missionary Fund at Batavia Assembly of God, 24 North Spruce Street, Batavia, New York 14020. Burial will be in Grand View Cemetery, Batavia.

Batavia - Mrs. Viola Bertha Hale, 96, of Batavia, died Tuesday, September 11, 2012 at her home in Batavia surrounded by her loving family. Mrs. Hale was born May 30, 1916 in Bennington, a daughter of the late John and Flossie Harvey Bartz.... View Obituary & Service Information

The family of Viola Hale created this Life Tributes page to make it easy to share your memories.

Send flowers to the Hale family.