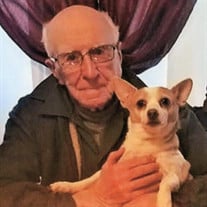 Vincent E. Squire, 98, of Batavia, passed away on Sunday, January 17, 2021 at United Memorial Medical Center. Vincent was born April 8, 1922 in Wethersfield, a son of the late Ernest V. and Helen (Hackett) Squire. Vincent owned V. Squire & Sons Construction. He enjoyed spending time with his family, tinkering around and being outside, especially gardening, working on his flowers and mowing the lawn. Surviving are his children, Jean (Sam) Tambe of Oakfield, Randy (Nancy) Squire of Batavia, Tim (Cheryl) Squire of Bergen and Lori DiFilippo of Batavia; grandchildren, Jay (Missy) Aquino of Batavia, Brett Squire of Las Vegas, NV, Jeremy Squire of Arizona, Taylor Squire of Bergen and Stacy Squire of Batavia; a great-granddaughter, Ally Aquino of Batavia; a sister, Florence DiMatteo of Oakfield; sisters-in-law, Mitzi Squire of North Carolina and Mary Shuknecht of Elba, many nieces and nephews and his faithful companion, Rusty. Vincent is the husband of the late, Irma J. (Shuknecht) Squire, they were married July 26, 1944, father of the late Larry and Kevin, grandfather of the late Zachary, brother of the late Norrine (Metz) Keem, Catherine (Kay) Hull, J. Edwin Squires and J. William Squire. Services will be held privately for Vincent's family and he will be laid to rest in Maple Lawn Cemetery in Elba. A Celebration of Life will be held at a later date. In lieu of flowers, memorials may be made to Volunteers for Animals, http://www.vol4animals.org/donate.

The family of Vincent E. Squire created this Life Tributes page to make it easy to share your memories.

Vincent E. Squire, 98, of Batavia, passed away on Sunday, January...

Send flowers to the Squire family.