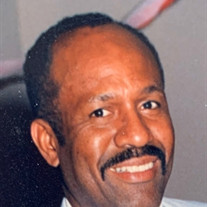 East Bethany - Temple D. Lewis, Jr., 82 of East Bethany passed away on November 5, 2020 at Strong Memorial Hospital in Rochester. He was a resident of this community for 23 years and attended First Baptist Church in Batavia. He was born in 1938 at Vasser Hospital, Poughkeepsie, New York, and was the son of Evelyn Pervall Lewis and Temple Lewis, Sr., both of whom predeceased him. He enlisted in the U.S. Army and served in the 14th Infantry Ranger Division for 2 years until he was honorably discharged, earning a Good Conduct Medal. After being discharged from the Army, he was employed by Dutchess Community College in Poughkeepsie for 34 years until his retirement on August 27, 1993. In May of 1985, he married his current wife, Darleene Peters. Previously, he had been married to Joann Pennix. They had three children: Camille D. Lewis Pittman who predeceased him; Lolita F. Lewis of Poughkeepsie, and Stephen D. Lewis, also of Poughkeepsie. He is survived by 5 grandchildren: Rashan Pittman, Elijah Jackson, Thiago Lewis-Araujo, Sacha Lewis-Araujo, and Zelehia Lewis. In addition, he is survived by two sisters, Laura Strother and Barbara Baker of Charlottesville, VA. A host of beloved nieces, nephews, cousins, and friends also survive. He always thought that his greatest qualities were his love of family and others regardless of who they were. He always enjoyed and helped people whenever he could and never stopped even though he was used and misused by some because of his kindness. He loved his hobby, classic cars, trucks, and tractors. He enjoyed the friends he met through this endeavor. His other hobby was riding his Harley and caring for and loving his dogs. He always said that you can't trust some people to treat you right but your dogs will always be your best friend. He was a perfect example of living a life of happiness, respect, and live and let live. There will be no visitation. A private graveside service and military honors will be held at Stafford Rural Cemetery. In lieu of flowers, memorials in Temple's name may be made to Volunteers for Animals, PO Box 1621, Batavia, New York 14021. The Lewis family entrusted the H.E. Turner & Co. Funeral Home, 403 E. Main St., Batavia with arrangements for Temple. Please leave a condolence, share a story, or light a candle at www.bataviafuneralhomes.com.

East Bethany - Temple D. Lewis, Jr., 82 of East Bethany passed away on November 5, 2020 at Strong Memorial Hospital in Rochester. He was a resident of this community for 23 years and attended First Baptist Church in Batavia. He was born... View Obituary & Service Information

The family of Temple D. Lewis created this Life Tributes page to make it easy to share your memories.

Send flowers to the Lewis family.