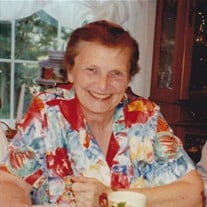 Batavia - Sondra M. Borger, 79, of Batavia, passed away Wednesday (July 25, 2012) at United Memorial Medical Center, following a lengthy illness. Ms. Borger was born October 2, 1932 in East Liverpool, OH, a daughter of the late Raymond and Ruth (Appleby) Borger. Sondra graduated from East Liverpool High School class of 1950. She performed as a singer and dancer in many local plays and as a solo artist. She sang at several churches in East Liverpool, including St. Stephens Episcopal Church. She graduated from Dana School of Music at Youngstown College (YSU) in 1954 with a bachelor's degree in music. She was named in Who's Who in American College and Universities from 1952-1954, performed at Stambaugh Auditorium in Youngstown several times, and was a member of Sigma Alpha Iota music fraternity. With an honorable discharge from The United States Marine Corps she moved to New York and started her teaching career until she retired. Sondra continued to sing and play piano and organ for several churches in the Batavia community and enjoyed her art classes. Surviving are her sister, Ruth Ann (Midge) Lowe, of East Liverpool, OH; nieces, Betsy (Jeff) Blankenship of GA, Beth Caldwell of FL, Jody Garavaglia of WV and Susan Bossert of OK; several great nieces, nephews, and a great-great nephew. She also leaves behind her best friend Fez. Preceding her in death are her sister Jane Borger Caldwell and nephew Christopher Kirschler. There will be no prior visitation. Services will be private and at the convenience of the family. In lieu of flowers, memorials may be made to the Dana School of Music, c/o Dr. Michael Crist, Director, Dana School of Music, Youngstown State University, 1 University Plaza, Youngstown, OH, 44555-3636 or St. Stephen's Episcopal Church, 220 W. 4th St., E. Liverpool, Oh, 43920. Burial will take place in Columbiana County Memorial Cemetery.

The family of Sondra Borger created this Life Tributes page to make it easy to share your memories.

Send flowers to the Borger family.