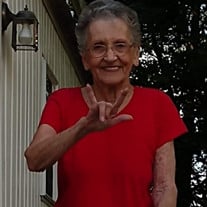 Sharon Lee Tolson was born on July 22, 1941, in Hanford, California. She crossed over into Heaven on July 2, 2021, while holding her daughters’ hands. A consummate California girl, she grew up on the beaches of Southern California during the best of times. Her beauty was such that she was asked to become a movie star in the late 1950’s. Instead of stardom she chose to be a wife and mother. She was a complex person that didn’t believe in calling anyone an “ex”; once you were in her family- it was for life, there was no getting out. She is predeceased by her former husband and children’s father, David R. Brown whom we’re sure she’s bossing around at this very instant and also her parents Thomas T. Tolson “the love of her life” and Jessie L. Tidwell (nee Pannell) definitely not the love of her life. Although she loved “her” California, she chose to put down her roots in the later part of her life in Batavia, NY. She loved all the trappings that come with small town life. Everyone called her “Gran” and she couldn’t have been prouder of that. She was a little crazy, swore like a sailor and taught the younger generation of the finer uses for the “F” word, drank Pepsi from morning until night and never met a stranger she wasn’t willing to befriend or invite for the holidays or if you were in a bad way, offer to do your laundry and make you corn dogs. She is survived by brothers William (Vicki) Tolson of AZ, Leedel and Denis (Kathy) Williamson of SD and Inez American Horse of SD. She is also survived by her children Mark (Sherry) Brown of St. Helens, Oregon and Maryann Brown, mother to Michael and Matthew (Amanda) of Long Island, Thomas (Robin) Brown of Northport, Florida and their children, Steven (son of Vikki Brown), Craig, Travis, Tim and Casie. She is also survived by her daughter Debra Dumuhosky (who took care of the hardest of jobs and also talked to her 27 times a day- burgeoning Alzheimer’s = so many calls), and partner William Gregory of Batavia, NY and David Dumuhosky father to Robert (Jessica) and Julia Rossiter, her daughter Kathryn Shaver and partner Keith Bow, of Corfu, NY and Ronald Shaver father to Maxwell (Rebecca), Sebastian (Melissa) and Kassandra (James Kerwin). Kass was her best friend, the one that was supposed to make sure to keep everyone in line and whom she entrusted her beloved Pom Teddy to because “he only barks when someone is at the door” and this trait is helpful. She died knowing that her favorite people called her “Gigi”; Paige, Everett and Henry Brown, Gabrielle and Olivia Dumuhosky, Alexis Merrell, Brockton Rossiter and Bennett Kelly, Evangeline Kerwin, and a whole tribe of great grandchildren in Florida she had yet to meet. There are many nephews and nieces that will miss her as well. There are no funeral arrangements. A celebration of life will be held when the family can get their act together. God help us if they have the weather channel in Heaven, Momma. We’ll miss you. See you later, Gorgeous.

Sharon Lee Tolson was born on July 22, 1941, in Hanford, California. She crossed over into Heaven on July 2, 2021, while holding her daughters&#8217; hands. A consummate California girl, she grew up on the beaches of Southern California during... View Obituary & Service Information

The family of Sharon Lee Tolson created this Life Tributes page to make it easy to share your memories.

Send flowers to the Tolson family.