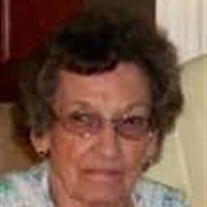 Raleigh, North Carolina - Mrs. Ruth E. Constantine, 93, of Raleigh, formerly of Mount Morris, passed away Friday, December 28, 2012, with family at her side at Hospice of Wake County in Raleigh. Mrs. Constantine was born September 9, 1919 in New Brunswick, New Jersey, the oldest daughter of the late William and Mary Nielsen DeSelms. Ruth retired from New York State, Craig Colony, Sonyea in 1975, where she worked as a supervising nurse as well as an R.N. She was accepted at the Duke University Nurse Practitioners' program in 1945, and had previously graduated from the Willard State Hospital School of Nursing, in New York. She was a member of the American and Catholic Nurses Association. Her husband of 55 years, John A. Constantine, passed away in 2000. Survivors include one son: Francis (Rosalie) Constantine of Erie, PA. three daughters: Susan LeMay of Washington, NC, Betsy (Ron) Boyd of Raleigh, NC and Peggy Proctor of Mount Morris, one sister: Helen (Gerald) Furman of Wilmington, DE, 6 grandchildren, 6 great grandchildren, and numerous nieces and nephews. The family will celebrate Mass at 11:30 on Thursday, January 3rd at St. Francis of Assisi Catholic Church Chapel in Raleigh. A Memorial Mass will be held at Resurrection Parish, St. Joseph's Church, 303 East Main Street, Batavia in the spring. Entombment will be in St. Joseph's Mausoleum. In lieu of flowers, donations may be made to Hospice of Wake County, 250 Hospice Circle, Raleigh, North Carolina, 27607 or your local Hospice.

The family of Ruth Constantine created this Life Tributes page to make it easy to share your memories.

Send flowers to the Constantine family.