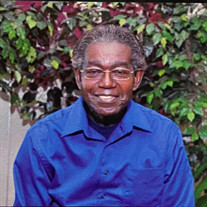 Roosevelt Smith, Sr., 75, long time residence of Genesee County, passed away on Saturday, December 26, 2020 at his son’s home under the care of his family. Roosevelt was born, January 24, 1945 in Minter, Alabama, a son of the late Lee Earnest and Lucinda (Moore) Smith. Roosevelt was a founding member of the Genesee Country Church where he served as a trustee; developed, organized and lead both the elementary and teen programs for years; and drove the church bus. He enjoyed reading his bible daily, mentoring youth, fishing, hunting and was an exercise enthusiast. Roosevelt was a member of Godfrey's Pond and summered at Lei-ti Campgrounds for many years. He also participated in bowling and softball leagues in Batavia and Oakfield for many years. He worked at P.W. Minor and Sons, for over 25 years, and also loved driving school bus for the Elba Central School District and worked for several years at Walmart in Batavia prior to retirement. Surviving are his sons, Roosevelt (Liza) Smith, Jr. of Byron and Christopher (Katelynn) Smith of Batavia. Grandchildren; Deacon, Malachi, Roman, Solomon, Genevieve, Ella, Lyla, Eva and Christopher and several nieces and nephews. His brothers; JD Smith, Lee Earnest Smith, Willie Smith and Sisters; Viola Smith, Rosie Mae Davis, Alberta Smith and Shirley Jackson. Preceded in death by James Smith, Bessie Davis, Willie Nell ”Lucy” Smith, and Deloise Smith. A Celebration of Roosevelt's Life will be held at a later date at the Genesee Country Church. In lieu of flowers, memorials may be made to Alzheimer's Association, https://act.alz.org/donate or A Cure for Polycystic Kidney Disease (PKD), pkdcure.org. Please use the email [email protected] if you would like to notify the family that you made a contribution in Roosevelt’s name.

Roosevelt Smith, Sr., 75, long time residence of Genesee County, passed away on Saturday, December 26, 2020 at his son’s home under the care of his family. Roosevelt was born, January 24, 1945 in Minter, Alabama, a son of the late Lee Earnest... View Obituary & Service Information

The family of Roosevelt Smith Sr. created this Life Tributes page to make it easy to share your memories.