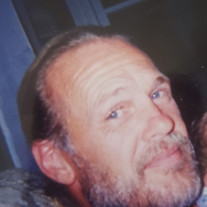 Oakfield - Ronald J. Ohlson, 66 of Oakfield passed away on Saturday, April 30, 2022 at United Memorial Medical Center in Batavia. Mr. Ohlson was born Saturday, April 28th, 1956 in Attica, New York a son of Julia Ohlson of Darien and the late Robert Ohlson. A diehard Buffalo Bills fan, he loved putting together model cars. He enjoyed spending time with his grandchildren and telling them one of his many jokes. He will be remembered for his infectious smile, sarcasm and his wonderful sense of humor. Surviving are along with his mother are his wife, Pam Ohlson of Oakfield; his children, Justin (Carrie) Ohlson of Oakfield, Chad (Erica) Ohlson of Attica and Brenda (Tom) Haworth of Batavia; nine grandchildren, Alex Ohlson, Tyler (Erica) Ohlson, Chad Ohlson, Jocelyn Ohlson, Brayden Ohlson, Tommy Haworth, Micah Haworth, Bella Haworth and Dominique (Fiancé Cory Mattison) Hale; his first great-grandson, Beckham Ohlson; his brothers, Bob (Patti) Ohlson of Texas, Tim (Diane) Ohlson of Darien and Scott (Sandy) Ohlson of Warsaw; his sisters, Dawn (Vic) Albano of Darien and Sherrie (Jim) Yerger of Byron and several nieces and nephews. He is predeceased by his son, Chad Ohlson who passed away in October of 1974 and his daughter, Jennifer M. Hale who passed away on December 20, 2001. Family and friends are invited to call on Monday, May 9th, 2022 from 4:00 pm to 6:00 pm at H.E. Turner & Co. Funeral Home, 403 East Main Street, Batavia where a time of sharing will follow at 6:00 pm. He will be laid to rest in St. Vincent's Cemetery, Attica on Tuesday morning at 11 am. In lieu of flowers, memorials may be made to the Ohlson family.

The family of Mr. Ronald J. Ohlson, Sr created this Life Tributes page to make it easy to share your memories.

Oakfield - Ronald J. Ohlson, 66 of Oakfield passed away on Saturday,...

Send flowers to the Ohlson family.