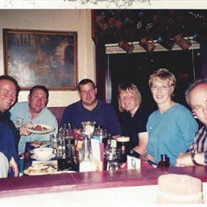 Byron - Robin M. Denniston-Keller, 44, of Byron, passed away Thursday, (December 5, 2013) at Monroe County Community Hospital, in Rochester, following a lengthy illness. She was the co-owner of Den-Kel Jerseys, LLC in Byron. Mrs. Denniston-Keller was born December 6, 1968 in Sharon, CT, the daughter of Roy T. Denniston of North Chatham, NY and the late Deborah (Berry) Denniston. She was a 1987 graduate of Ichabod Crane Central School in Kinderhook and earned a Bachelor's Degree from Cornell University in 1991. Robin had a passion for working with dairy cattle, beginning with her high school job, working at Dutch Hollow Farm. She was active in 4-H, served as an officer in both the ENY and State Junior Holstein Club, and was a Distinguished Junior Member of the New York Holstein Association. Working with her husband, Kip, she developed an outstanding herd of registered Jersey Cattle, selling several bulls to A.I. studs in the United States and Canada, and receiving the Outstanding Young Breeder Award from the American Jersey Cattle Association. Robin had many friends in the agricultural community. She was a 4-H Junior Holstein Club leader, and served as a state director for the Nioga Holstein Club, president of the Genesee County Farm Bureau, president of the NYS Jersey Cattle Club. Robin was elected a national director, representing New York for the American Jersey Cattle Association. Through her life, she enjoyed showing cattle with her dad at the county, state, and national levels. Robin was the wife of Kip Keller of Byron. The two were married August 13, 1994. Surviving along with her husband and father are her father-in-law, Robert B. Keller of Chatham; brothers-in-law, Paul (Joann) Keller and Kent (Roberta) Keller both of Kinderhook; sisters-in-law, Kim Ehlers of Stuyvesant, and Kristine (Timothy) Ooms of Chatham. Several nieces and nephews also survive. Robin is preceded in death by her mother and her mother-in-law, Judith (Atkinson) Keller. Friends may call on Tuesday 12/10 from 4 to 7 p.m. at the H.E. Turner & Co. Funeral Home, 403 East Main Street, Batavia, where Robin's memorial service will be held immediately following calling at 7. A second service will be held Friday 12/20 at 11 AM, at the North Chatham United Methodist Church, 4274 New York 203, North Chatham. In lieu of flowers, memorials may be made to the AJCC Research Foundation, 6486 East Main Street, Reynoldsburg, Ohio 43068 or the American Diabetes Association, 315 Alberta Drive, Amherst, NY 14226.

The family of Robin Denniston-Keller created this Life Tributes page to make it easy to share your memories.

Send flowers to the Denniston-Keller family.