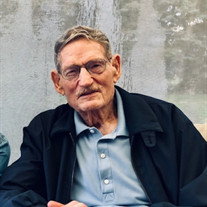 Oakfield - At age 97; Born on July 29th, 1923 in South Alabama, NY to William Genesky Sr. and Elizabeth (Frieday) Genesky. Loving husband of Dora (Nanni) Genesky who passed away last year, for 69 years, his children; Derek (Elizabeth Balbick) Genesky of Batavia; Martin (Judi Fischbach) Genesky of Alpharetta, Ga.; John (Terry Agro) Genesky of Kenmore; Bruce (Patricia Heckathorn) Genesky of Holland, MI.; and Donna Genesky of Kenmore, New York; six grandchildren, Geoffrey Genesky, Eric Genesky, Lauren Genesky, Derek Comer, Christian Genesky, Robert “Alex” Genesky and three great grand-children. He was predeceased by four brothers; William Genesky Jr., Edward Genesky, Leonard Genesky and John Genesky, and two sisters; Mable Drachenberg and Margaret Mingle. Robert was a World War Two veteran serving as a sergeant in the Army Air Corps as a radio man on 35 bombing missions, many over key targets in Germany. He received several accommodations and in 2015 received the French Legion of Honor Medal, a recognition of courage and bravery in helping to drive Nazi Germany from French soil. After returning from the war he worked at Doehler Jarvis in Batavia for 39 years followed by 5 years with Martin Marietta Aerospace. In addition, he was an electrician and wired several new houses in Oakfield. Robert also served his hometown of Oakfield as first a Village Trustee followed by 10 years as Mayor through the early 1980's. He was a lifelong member of St. Cecelia's Church in Oakfield where he was a eucharistic minister and scripture reader for many years. Robert enjoyed time with his family foremost but also liked to play golf, keep up with the Buffalo Bills and had many a home project which kept him occupied. He will be remembered by family as a loving father and devoted husband. He loved time spent with his grandchildren and great grandchildren. He was a kind and honorable man who served his country and hometown with grace and humanity, a man who put others before himself and loved family most of all. Due to COVID-19 concerns, an immediate family, by invitation only, Mass of Christian Burial will be held this week and a Celebration of Life will be scheduled in the future. In lieu of flowers, memorials may be sent to, Disabled American Veterans, 3680 Rose Rd Batavia, NY 14020 or Volunteers for Animals. 3841 W. Main Street Batavia, NY 14020.

The family of Mr. Robert Wilbur Genesky created this Life Tributes page to make it easy to share your memories.

Send flowers to the Genesky family.