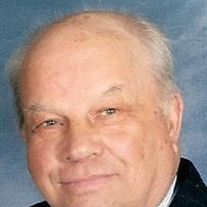 Elba - Mr. Robert C. Ellingham, 78, of Elba, an assembler at O&K Trojan in Batavia, passed away Saturday, October 20, 2012 at Buffalo General Hospital. Mr. Ellingham was born March 9, 1934 in Batavia, a son of the late R. Henry and Carmelita Blatt Ellingham. A fan of the New York Yankees and Buffalo Bills, he enjoyed fishing, going to the casino and taking trips to Point Breeze. He served with the United States Army during the Korean Conflict. His family will remember him as a dedicated, hard worker who always provided for his family. Mr. Ellingham also worked at Batavia Downs for 41 years. He is survived by his wife of 58 years, Sandra Jannain Ellingham; a son, Richard Ellingham of Elba; three daughters, Susana (Michael) Quinn of Batavia, Amy (Daniel) Medoff of Arvada, Colorado and Patricia Ellingham of Salem, Virginia; three brothers, David (Eleanor) Ellingham and Timothy Ellingham, both of Rochester and James Ellingham of Naples, Florida; a sister, Mary Skeet of Batavia; a sister-in-law, Josephine Ellingham of Stafford; eight grandchildren and several nieces and nephews. He is the brother of the late Ronald and Gerald Ellingham. Friends may call on Wednesday from 2 to 5 p.m. at the H.E. Turner & Co. Funeral Home, 403 East Main Street, Batavia, where services will immediately follow at 5 p.m. Private burial will be in Maple Lawn Cemetery. Memorials may be made to Lake Plains Dialysis, 587 East Main Street, Suite #350, Batavia, New York 14020.

The family of Robert Ellingham created this Life Tributes page to make it easy to share your memories.

Send flowers to the Ellingham family.