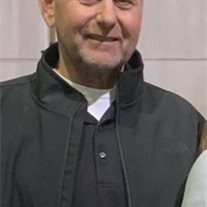 Obituary of Robert J. Barnard Batavia - Robert J. "Bob" Barnard, 61, of Batavia, passed away on Monday, November 25, 2019, at his home while under the care of HomeCare & Hospice and his loving family.   Bob was born August 17, 1958, in West Berlin, Germany, a son Mary (McMullen) Barnard of Perry and the late Charles W. Barnard.   A veteran, Bob served with the United States Army from 1976 to 1979.  Bob was a detention officer for the Buffalo Federal Detention Agency in Batavia and a member of Resurrection Parish.  Above all else, he will be remembered as a family man who cherished his grandchildren.   Surviving along with his mother are his wife, Debra (DiAntonio) Barnard of Batavia; children, Nicole (Ben) Chamberlain of North Chili, Amy (Dave) Tabbi of Clarence Center and Robert Barnard, II of Rochester; grandchildren, Jaiden, Luca and Dominic; brothers, John (Theresa) Barnard of Leicester, Brian Barnard of Perry, Thomas (Sophia) Barnard of Schertz, TX and Henry (Darleen) Barnard of Henderson, NV; his mother-in-law, Concetta DiAntonio of Batavia; his sisters-in-law, Sharon (Ronald) Robbins of Batavia, Mary Jo (Rick) Thomas of Batavia and Georgina (Bob Lawton) Buck of Oakfield and several nieces and nephews. Along with his father, Bob is predeceased by his brother-in-law, Frank DiAntonio. Calling hours are Monday from 5:00 p.m. to 8:00 p.m. at the Bohm-Calarco-Smith Funeral Home, 308 East Main Street, Batavia.  Bob's Mass of Christian Burial will be Tuesday at 10:00 a.m. at Resurrection Parish, 303 East Main Street, Batavia.  Entombment with military honors will be in St. Joseph's Mausoleum, Batavia.   In lieu of flowers, contributions in Robert's memory may be made to to the Barnard family.

Obituary of Robert J. Barnard Batavia - Robert J. "Bob" Barnard, 61, of Batavia, passed away on Monday, November 25, 2019, at his home while under the care of HomeCare & Hospice and his loving family.   Bob was... View Obituary & Service Information

The family of Robert J. "Bob" Barnard created this Life Tributes page to make it easy to share your memories.