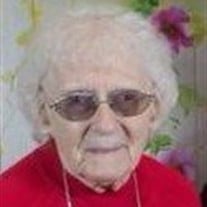 Obituary of Rita A. Cone ALEXANDER - Rita A. Cone, 93, of Phoenix, formerly of Alexander, passed away Saturday, (July 4, 2020), at The Palazzo in Phoenix, Arizona.   Mrs. Cone was born August 7, 1926, in Chicago, Illinois, a daughter of the late Frank Chessar and Katherine (Walsh) Derwald.   Rita was a member of Resurrection Parish and was retired from the Batavia Nursing Home where she was a registered nurse.  She enjoyed knitting and crocheting, was an avid Buffalo Bills and Sabres fan.  Family was very important to Rita.  She cherished time spent with her children, grand children, and great-grandchildren.   She was the wife of the late Almon W. Cone who passed away in 1990 and mother of the late Donna Brister.  Survivors are her children, Lawrance Cone, and Elaine Cone both of Arizona, Cheryl (Charles) Venditte of Stafford, and Debora Miller of Alexander; brothers, Richard (Maureen) Derwald, and Christopher (Elizabeth) Walsh both of Buffalo.  12 grandchildren and 16 great-grandchildren also survive. There will be no visitation.  A Mass of Christian burial will be held privately at Resurrection Parish - St. Joseph's Church.  Burial will follow in Grand View Cemetery in Batavia.   In lieu of flowers, memorials may be made in Rita’s name to Alexander Dollars for Scholars, c/o Alexander High School, 3314 Buffalo Street, Alexander, New York 14005. Arrangements were entrusted to the H.E. Turner & Co. Funeral Home, Batavia.

The family of Rita A. Cone created this Life Tributes page to make it easy to share your memories.

Obituary of Rita A. Cone

Send flowers to the Cone family.