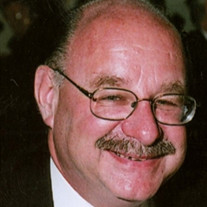 Batavia - Richard A. Lawrence, 76 of Batavia, passed away on Saturday, April 10, 2021 at Hildebrandt Hospice Care Facility in Rochester. Mr. Lawrence was born on September 22, 1944 in Buffalo, New York a son of the late Leo Lawrence and Ida Bognar Lawrence. A registered professional nurse, he retired from the United States Army Reserve as a Major and served for many years in the Army Nurse Corps. Prior to serving with the United States Army, he served as a hospital corpsman with the United States Navy. Richard served in Operation Desert Storm in the early 90s. Following his retirement from the United States Army he worked as a staff nurse, head nurse, and an operating room supervisor at Buffalo General Hospital. He completed several successful civilian and military leadership/manger courses. Using those skills, he managed the gaming floor at Batavia Downs Gaming and Hotel. Surviving is his fianceé, Paula Kelly of Perry; his daughter, Sara (George) Calvin of Apex, North Carolina; his grandson, Luca Calvin; Sara's mother, Barbara Lawrence of Amherst; his brother-in-law, Peter Simon of Buffalo; his niece, Jessica (nee Simon) Murphy of Buffalo; and his niece, Rebecca Simon of Denver, Colorado. He is predeceased by his beloved sister, Barbara Simon. Richard had a zest for life that was apparent to all. He loved travel, particularly to Ireland and Europe with his fiancé Paula, as well as many road trips to military bases and civil war battle sites. Richard was an avid fan of music, particularly The Beatles. He was lucky enough to see Elvis Presley in concert in his younger years. One of Richard’s most cherished memories was attending a Paul McCartney concert with his daughter Sara in 2015. Richard was blessed to have a group of friends with whom he regularly played low-stakes cards in Batavia. There are no prior visiting hours. Private services, with military honors will be held at the convenience of the family at Western New York National Cemetery. In lieu of flowers, memorials may be made to St. Jude Children's Research Hospital, Memorial Processing, 501 St. Jude Place, Memphis, TN 38105-9959.

Batavia - Richard A. Lawrence, 76 of Batavia, passed away on Saturday, April 10, 2021 at Hildebrandt Hospice Care Facility in Rochester. Mr. Lawrence was born on September 22, 1944 in Buffalo, New York a son of the late Leo Lawrence and... View Obituary & Service Information

The family of Mr. Richard A Lawrence created this Life Tributes page to make it easy to share your memories.

Send flowers to the Lawrence family.