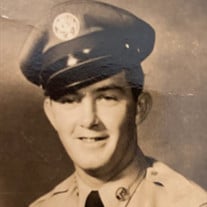 Obituary of Richard C. Barnard, Sr. Byron - Richard C. "Barney" Barnard, Sr., 88, passed away Thursday, August 13, 2020, at New York State Veteran's Home.   Mr. Barnard was born September 1, 1931, in Byron, son of the late George and Elsie Airth Barnard.   Known as "Barney" to many, he was loved by his family and was a friend to all who he came in contact with. He was a lifelong Genesee County resident who spent the majority of his life in Byron on Mill Pond Road in the family homestead that was built by his father. A lifetime member of the South Byron Fire Company, Barney was a member of the Sackett-Merrill-White American Legion Post 575 in Bergen for 23 years. A machinist by trade, he loved to tinker with anything. Barney was an avid golfer and skilled bowler well into his 70's. He proudly served his country with the United States Air Force during the Korean War. Survivors include his beloved wife of 65 years Helen Kwasniak Barnard; his children: Vicki (late Gene) Austin of Batavia, Michelle (Peter) Yasses of Byron Richard (Pam Pera) Barnard, Jr. of Barre and Mary (Joe) Hawken of Brentwood, Tennessee and his sister: Arlene Boldt of Byron. Barney is also survived by ten grandchildren, eight great-grandchildren and several nieces and nephews.   He is predeceased by his siblings, Burton Barnard, Stanley Barnard, Lois Watson, Leone Sadler, Lester Barnard and Dean Barnard. Barney's family wishes to extend their sincere appreciation and gratitude to the staff at the New York State Veteran's Nursing Home for the caring and compassionate care he received while he was a resident. Friends may call from 5:00 p.m.- 8:00 p.m. on Friday at the H.E. Turner & Co. Funeral Home, 403 East Main Street, Batavia where members of the South Byron Fire Company will meet at 7:30 p.m. for services. Memorial services will be held at 11 a.m. Saturday at the funeral home with Rev. Harold N. Coller officiating. Burial, with military honors will follow in Byron Cemetery.  In lieu of flowers, memorials may be made in Richard’s name to the New York State Veteran's Home, 220 Richmond Avenue, Batavia, New York 14020 or to Sackett-Merrill-White American Legion Post 575, 21 North Lake Avenue, Bergen, New York 14416.

The family of Richard C. "Barney" Barnard, Sr. created this Life Tributes page to make it easy to share your memories.