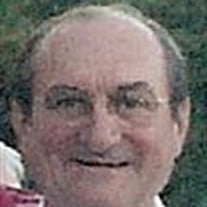 Batavia - Mr. Peter R. DellaPenna, 73, of Batavia, owner and president of DellaPenna Paving and co-owner of Soccio & DellaPenna, passed away surrounded by his family on Sunday, October 20, 2013 under the care of HomeCare & Hospice. Mr. DellaPenna was born March 13, 1940 in Batavia, a son of the late Thomas and Mary Calarco DellaPenna. A longtime member of St. Mary's Church, he was a member of the first graduating class from Notre Dame High School in 1957. He was a 50-year member, past-president and volunteer with the speech and hearing clinic of the Batavia Lions Club. He had the distinct honor of obtaining perfect attendance for 50 years. He wintered in Sarasota, Florida for many years and volunteered his time at the Ringling Brothers Circus and Moto Marine Laboratory in Sarasota. He is survived by his children, Thomas M. (Carolyn) DellaPenna and Mary C. DellaPenna, both of Batavia; two granddaughters, Sydney DellaPenna and Abby Lyons, both of Batavia; his children's mother, Judy Montague DellaPenna of Batavia; his sister, Madeline Ferris of Batavia and several nieces and nephews. He is the brother of the late Rosemary Donald. Friends may call on Tuesday from 4 to 8 p.m. at the Bohm-Calarco-Smith Funeral Home, 308 East Main Street, Batavia. His Mass of Christian Burial will be held on Wednesday at 12:00 noon at Resurrection Parish - St. Mary's Church, 18 Ellicott Street, Batavia. Burial will be in St. Joseph's Cemetery, Batavia. In lieu of flowers, please consider memorials to Resurrection Parish, 303 East Main Street, Batavia, New York or to Notre Dame High School, 73 Union Street, Batavia, New York 14020.

Batavia - Mr. Peter R. DellaPenna, 73, of Batavia, owner and president of DellaPenna Paving and co-owner of Soccio &amp; DellaPenna, passed away surrounded by his family on Sunday, October 20, 2013 under the care of HomeCare &amp; Hospice.... View Obituary & Service Information

The family of Peter DellaPenna created this Life Tributes page to make it easy to share your memories.

Send flowers to the DellaPenna family.