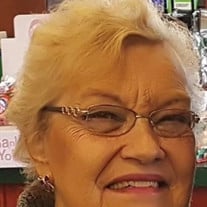 Oakfield - Paula Ann (Dennis) Luker, 72 of Oakfield, entered into eternal peace on Tuesday (January 18, 2022) in the home she built with her husband Dan by her side. Paula was born on December 7, 1949 in Batavia, to the late Arthur and Dolores (Smith) Dennis. Paula was raised in Alabama, New York, was a graduate of Oakfield-Alabama Central School, worked for several years at Peterson's Drug Store and managed the "Love of Pete" gift shop in Oakfield. Paula also served on both the Oakfield Town and Village Boards and proudly served in various positions as a member of the Oakfield First Presbyterian Church. Paula had a gift to write and say the most beautiful words. She loved sending out cards to her family and friends, always with a small note for that special added touch. She would say her "life is wonderful, God has truly blessed me." Paula married her high school sweetheart, Dan on October 26, 1968 and recently celebrated their 53rd wedding anniversary. She was so proud of her two children and would tell everyone about her five beautiful grandchildren. Paula is predeceased by her parents, Arthur and Dolores (Smith) Dennis and Father-in-law, Carl Luker. She is survived by her loving husband, Daniel; her daughter, Kimberly (Edward) Staniszewski; her son, Jeffrey (Shui-Wah) Luker; her grandchildren, Emily Ann, and Joseph Staniszewski, Nathaniel, Katarina, and Angelina Luker; mother-in-law, Irene Luker; brother, Alan (Debbie) Dennis; sister, Wendy (Mike) Saeli; sisters-in-law, Diane (Rick) Stafford, Tammy (Rick) Way, and Cindy (John Ramos) Luker. Several nieces and nephews who she loved very much also survive. Family and Friends may call on Saturday from 2 to 5 p.m. at the Oakfield United Methodist Church, 2 South Main Street in Oakfield, where Paula's Funeral Service will immediately follow at 5 p.m. Burial will be in Cary Cemetery in Oakfield. In lieu of flowers, memorials may be made to the Oakfield United Methodist Church or the Oakfield Fire Department, 20 Albert Street, Oakfield, New York 14125. Arrangements were entrusted to the Burdett & Sanford Funeral Home in Oakfield. Please leave a condolence, share a story, or light a candle at www.burdettandsanford.com.

Oakfield - Paula Ann (Dennis) Luker, 72 of Oakfield, entered into eternal peace on Tuesday (January 18, 2022) in the home she built with her husband Dan by her side. Paula was born on December 7, 1949 in Batavia, to the late Arthur and Dolores... View Obituary & Service Information

The family of Paula Ann Luker created this Life Tributes page to make it easy to share your memories.

Send flowers to the Luker family.