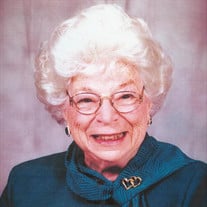 After 102 years, Naomi Parsons Meier Slusser left this world on June 5, 2021 to be with loved ones in heaven. She was born in Ripley, WV, the daughter of Guy W. and Pearl Williams Parsons. She was preceded in death by her first husband, Donald W. Meier, whom she married in 1946. After Don’s death, she married William H. Slusser, a fellow employee of Batavia Metal Products and longtime friend. Bill died in 2012 after thirty years together. She was also preceded in death by her brother, Guy S. Parsons and her great granddaughter, Katherine Meier. Naomi is survived by her daughter, Susan Meier (John) Magnano, and son, Stephen W. (Lei) Meier; grandchildren Christopher (Marilyn) Magnano, Matthew (Irina) Meier, Meghan Meier; and great-grandson Artemi Meier; her sister Janet Goff, former daughter-in-law Bonnie Meier, and many nieces, nephews and friends. Naomi was a graduate of Ripley High School and the Charleston School of Commerce in Charleston, WV. She was employed by the Bank of Ripley, where she advanced to Assistant Cashier and became a member of the US Association of Banking Women. In 1946, she moved to Stafford, NY with her husband Don and was employed by Vanguard Abrasive and Houskenecht Motors while her children were small. She spent the last 22 years of her career as the accountant at Batavia Metal Products. She loved to travel with her husband Bill making trips to Alaska, Hawaii, the Panama Canal, various countries in Europe, and numerous cruises. They also spent 25 winters in Sanford, FL at their second home, hosting multiple family and friends. Naomi was an enthusiastic walker and won seven First Prize Awards in the Golden Age Olympics, held in Florida each winter. She had many hobbies and interests, and will be remembered for her baking and cooking, hosting holidays, playing cards, garage sales and square dancing. For more on Naomi’s remarkable life, be sure to pick up a copy of her autobiography, “A West Virginia Hillbilly’s Story,” published shortly before her passing. Calling hours will be held Friday, June 11 from 4-7 p.m. at H. E. Turner & Co, Batavia. A Celebration of Life will be held on Saturday, June 12 at 11 a.m. at The First Presbyterian Church of LeRoy, where she was a longtime member. Private interment to follow at Morganville Cemetery. In lieu of flowers, Naomi Slusser requested that donations be made to The First Presbyterian Church of LeRoy.

After 102 years, Naomi Parsons Meier Slusser left this world on June 5, 2021 to be with loved ones in heaven. She was born in Ripley, WV, the daughter of Guy W. and Pearl Williams Parsons. She was preceded in death by her first husband, Donald... View Obituary & Service Information

The family of Naomi Parsons Meier Slusser created this Life Tributes page to make it easy to share your memories.

Send flowers to the Slusser family.