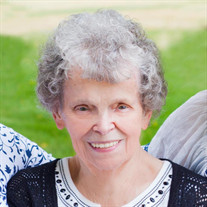 Mary Elizabeth Delbridge Shuknecht, 94, of Elba, passed peacefully at home on Sunday, (January 31, 2021). She was born on August 22, 1926 in Batavia to the late Raymond and Mae Delbridge. She is predeceased by her husband, Neil Shuknecht, whom she married on April 29, 1950 in an intimate ceremony. Mary was a devoted farm wife during their many years together. Mary graduated from Batavia High School and then attended a two-year business program at Miami University in Ohio. She worked in the banking business for most of her career at Anchor Bank in Batavia, where she always had a smile and a friendly hello for her customers. In her free time, she supported her children who were actively involved in the local 4-H program. Mary was a lifelong avid reader and would frequently tell the story of the time she was running and reading as a child, when she tripped over a toy and broke her arm. She could be seen frequently looking for the latest books to read at Richmond Memorial Library into her early 90s. She was also an active member of St. James Church of Batavia and enjoyed their Friday Fish fry dinners. Mary always put others first and was a loving wife, mother, grandmother and great-grandmother. Mary’s lifelong motto at dessert: “I’ll have a little of each!” She loved life and her sweet treats! Mary was the loving mother of Gerald (Valerie) Shuknecht of Keeseville, NY, Cynthia Chisholm of Las Vegas, Donald (Cindy) Shuknecht of Elba, and Cathy (Chip) Wynn of Hummelstown, PA. She is also survived by her grandchildren, Jered (Katie) Shuknecht, Sarah (Barry) Christ, Shane (Anastacia) Shuknecht, Amanda (Rich) Drowne, Courtney (Erik) Jenks, Mary Jean Shuknecht and Ashley (Eric) Rossello. Mary was also blessed with ten great-grandchildren. Mary was predeceased by her son-in-law, Christopher Chisholm; her brother, Wade; sisters, Donna Coward and Eleanor Gaiser; brothers-in-law and sisters-in-law. There will be no calling hours. A graveside service will be held in the spring at a later date. In lieu of flowers, memorials may be made to Richmond Memorial Library, 19 Ross Street, Batavia, New York 14020.

Mary Elizabeth Delbridge Shuknecht, 94, of Elba, passed peacefully at home on Sunday, (January 31, 2021). She was born on August 22, 1926 in Batavia to the late Raymond and Mae Delbridge. She is predeceased by her husband, Neil Shuknecht, whom... View Obituary & Service Information

The family of Mary Elizabeth Delbridge Shuknecht created this Life Tributes page to make it easy to share your memories.

Send flowers to the Shuknecht family.