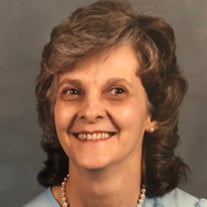 Batavia - Mary L. Saile, 82 of Batavia, passed away on Tuesday, April 5, 2022 at Unity Hospital in Rochester. Mrs. Saile was born Thursday, November 2nd, 1939 in Batavia, a daughter of the late Franklin Stocking and Alice Russell Stocking. A member of Northgate Free Methodist Church, she was an avid reader and card player. She enjoyed camping and listening to music. She “adopted” many stray dogs and will be remembered by her family as their caretaker as she cared for her children and grandchildren. Mary is the wife of Vernon Charles Coniber who passed away on May 20, 1960 and Lynford F. Saile who passed away on August 20, 2012. She is survived by her children, Rev. Vernon (Debbie) Saile of Byron, Cindy (David) Landrum of Appomattox, Virginia and Lyndy (Late Robin) Branton of Byron; her daughter-in-law, Kathy Saile of Batavia; ten grandchildren; Ashley, Zachary, Christopher, Stephen, Peter, Danielle, Carissa, Jessica, Megan and Rebecca; six great-grandchildren; Ephraim, Brynn, Elijah, Bailey, Sophie and Collin along with a sister-in-law, nieces and nephews. She is predeceased by her son, Joseph F. Saile who passed away on March 14, 2019 and her grandson, Matthew Saile who passed away on September 7, 1992. Family and friends are invited to call on Monday, April 11th, 2022 from 11:00 am to 1:00 pm at H.E. Turner & Co. Funeral Home, 403 East Main Street, Batavia. Mary’s funeral service will immediately follow visitation at 1:00 pm. She will be laid to rest in Grand View Cemetery in Batavia. In lieu of flowers, memorials may be made to Northgate Free Methodist Church, 8160 Bank Street Road, Batavia, New York 14020.

The family of Mrs. Mary L. Saile created this Life Tributes page to make it easy to share your memories.

Send flowers to the Saile family.