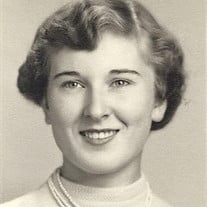 Clarendon - Martha J. Cain, 75, of Clarendon, passed away Friday, (December 28, 2012) at Strong Memorial Hospital, in Rochester, following a brief illness. Mrs. Cain was born July 8, 1937 in Batavia, a daughter of the late Rollie and Elma (Frisch) Smith. Martha was a member of the Faith Community Chapel, in Batavia where she was very active. She greatly enjoyed gardening and was a kind, gentle person with an unexpected sense of humor. Mrs. Cain was devout in her faith in the Lord and was ready to "go to work with God." She enjoyed spending time with her family and those that knew her will never forget her smile. She is survived by her husband, Alvin Cain, whom she married February 2, 1958; a son, Patrick C. (Vicki) Cain; granddaughters, Brittany and Monica Cain, all of Lyndonville; a brother, Roger (Sue) Smith of Las Vegas, NV; a sister, Noreen (Jim) Davis of Colorado Springs, CO; aunts, Ruth Harold of Medina and Edna Cummings of Wolcottsville; brothers-in-law, Richard Cain of Oakfield and Gary (Loretta) Cain of Pembroke; sisters-in-law, Audrey (late Earl) Potter of Indian Falls, Gail Cain of Albion, and Gaye (Billie) Bolton of Baker, FL. Several nieces and nephews also survive. Martha is preceded in death by a brother, Gordon Smith; her mother-in-law, Helen Cain; and a brother-in-law, Cleo (late Helen Green) Cain. Friends may call on Friday from 4 to 6 p.m. at Burdett & Sanford Funeral Home, 11 Maple Avenue, Oakfield, where Martha's Funeral Service will be held immediately following calling at 6:00 PM. Memorials may be made to the Palliative Care Unit at Strong Memorial Hospital, 601 Elmwood Ave., Rochester, NY 14642. Burial will be in Mt. Pleasant Cemetery, West Shelby, at a later date.

The family of Martha Cain created this Life Tributes page to make it easy to share your memories.

Send flowers to the Cain family.