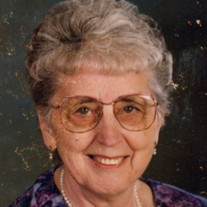 Lulu (Lou) J. Kirkpatrick Tillotson of Batavia, and formerly from Pavilion and Oakfield passed away on Thursday, February 25, 2021, at the age of 97. She was born on July 19, 1923, the daughter of John and Lillian (Root) Pask. Lou was a homemaker and graduated from Oakfield Alabama High School, enjoyed traveling in her younger years, liked to play dominoes, was known for knitting her coveted dish cloths, and especially enjoyed visiting with her many family members and friends. Although Lou endured many physical difficulties in her recent years, she often reflected that she was very lucky to have had such a long and wonderful life on Earth. Lou married William (Bill) Kirkpatrick Jr. of Elba on November 14, 1942 and they resided together in Oakfield after he completed military service in 1946. They were married for over 26 years. They had two sons Larry (Cathy) Kirkpatrick and Paul (Eileen) Kirkpatrick. Larry passed away in Florida in June, 2013, where his wife Cathy still resides, along with Lou’s grandchildren Bret (Cyndi) Kirkpatrick and Christie (Terry) Major, and Lou’s four great grandchildren, Brooke and Taylor Major and Cathy and Emily Kirkpatrick. Paul and Eileen continue to reside in Oakfield. After Bill Kirkpatrick passed away in February 1969, Lou was blessed to meet her second husband Harold (Bud) Tillotson Jr. of Pavilion. They married in July of 1971, bringing Bud’s children, Sue (Bill) Semmel of York, Paul (Dana) Tillotson of Pavilion, David (Noreen) Tillotson of Pavilion, and Douglas (Tina) Tillotson of Silver Springs into Lou’s life. Bud and Lou enjoyed 32 years of marriage before his death in June 2003. Lou and Bud are also survived by another 11 grandchildren, 28 great-grandchildren, and 2 great-great-grandchildren. As Lou requested, services will be held privately for family members at the Burdett & Sanford Funeral Home, Maple Avenue in Oakfield, on Friday, March 5, 2021 at 3 pm. Due to the current Covid situation, there will be no prior calling hours. Flowers are gratefully declined. Lou will be buried in the Cary Cemetery in Oakfield. Memorials may be made to a charity of the donor’s choice, or to the Bereavement Ministry of St. Padre Pio Parish, 56 Maple Avenue, Oakfield, NY 14125.

Lulu (Lou) J. Kirkpatrick Tillotson of Batavia, and formerly from Pavilion and Oakfield passed away on Thursday, February 25, 2021, at the age of 97. She was born on July 19, 1923, the daughter of John and Lillian (Root) Pask. Lou was a homemaker... View Obituary & Service Information

The family of Mrs. Lulu J. Kirkpatrick Tillotson created this Life Tributes page to make it easy to share your memories.