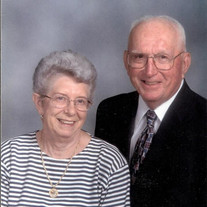 Byron - Lester J. Barnard, 92, of Byron, passed away Friday, (April 5, 2013) at LeRoy Village Green Nursing Facility, in LeRoy. Mr. Barnard was born June 6, 1920 in Batavia, a son of the late George and Elsie (Airth) Barnard. Les was a member of the Byron Fire Department for 69 years and a member of the Byron Presbyterian Church. A machinist by trade, he retired from Lapp Insulator in LeRoy after 40 years and even had his own machine shop where we would turn and machine various parts for the fire department as well as his friends. He was very handy, and greatly enjoyed helping others. In his younger years, he loved to dance and later in life he enjoyed traveling to Florida in his motorhome with his wife, Mary. After his retirement, he would often be seen at his sister, Arlene's farm, in Stafford and he greatly enjoyed his Friday night Fish Fry. He is the husband of Mary E. (MacConnell) Barnard, whom he married July 11, 1980 in South Byron. Surviving along with his wife are his son, Norm (Sharon) Barnard of El Paso, TX; step-sons, Twilly (Pamela) Lynch of Byron and Robert (Sue) Lynch of Titusville, FL; brothers, Stanley (Edna) Barnard of FL, Richard (Helen) Barnard of Byron; a sister, Arlene (late Bus) Boldt of Stafford. 6 grandchildren, 10 great-grandchildren, 4 great-great-grandchildren as well as several nieces and nephews also survive. Lester is preceded in death by his first wife, Loretta Barnard; a son, Robert Barnard; and siblings, Burton Barnard, Dean Barnard and Lois Watson. Friends may call on Tuesday from 4 to 8 p.m. at H.E. Turner & Co. Funeral Home, 403 East Main Street, Batavia. Lester's Memorial Service will be at 11:00 a.m., Wednesday, April 10, 2013 at Byron Presbyterian Church, 6293 West Main, Byron. In lieu of flowers, memorials may be made to the Byron Fire Department & Rescue Squad, PO Box 210, 6357 Townline Road, Byron, NY 14422, or the Byron Presbyterian Church. Burial will be in Byron Cemetery, Byron.

The family of Lester Barnard created this Life Tributes page to make it easy to share your memories.

Send flowers to the Barnard family.