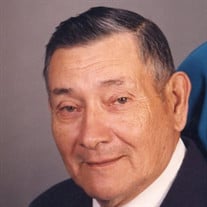 Oakfield - Leo K. Reak, 95, of Oakfield, passed away on Saturday, September 19th, 2020 at Premier Genesee Center for Nursing and Rehabilitation. Leo was born February 20th, 1925 in Alabama Center, a son of the late Charles and Elsie (Spring) Reak. A veteran, Leo served with the United States Army, earning the rank of Corporal T5. During his service with the Army, Leo was a part of the supply and prisoner transport in the Philippines and office filing in Hawaii. Leo enjoyed fishing, hunting and gardening and was a past member of the VFW. He worked at Doehler Jarvis as a metal worker and as a miner at US Gypsum in Oakfield. Surviving are his son, Paul (Alice) Reak of Elba; his daughter, Ellen (Douglas) Murrray of East Bethany, seven grandchildren, thirteen great-grandchildren and several nieces and nephews. Leo is predeceased by his wife, Ruth Reak, son, Ronald Reak, daughter-in-law, Mary Reak, great-granddaughter, Crystal Murray, brothers, Stanton Reak, George Reak and Raymond Reak and his sisters, Verna Morse, Irma Cavigliano and Ruth Jones. Leo's service and military honors will be held privately at Grandview Cemetery in Batavia. In lieu of flowers, memorials may be made to a charity of the donor's choice.

The family of Leo K. Reak created this Life Tributes page to make it easy to share your memories.

Send flowers to the Reak family.