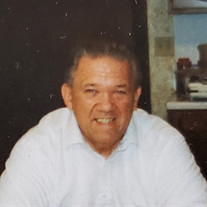 Batavia - Lawrence Bordonaro, 84 of Batavia, passed away on Wednesday, (February 10, 2021) at Premier Genesee Center for Nursing and Rehabilitation in Batavia. Larry was born April 27, 1936 in Batavia, a son of the late Frank and Dorothy (Balazinac) Bordonaro. Larry was a long time car salesman at several local dealerships. He was a member of Resurrection Parish, a past member of the Automobile Association, Coin & Stamp Club and Batavia Area Jaycees all in Batavia, both the Batavia and Oakfield Historical Societies. He earned a Bachelors in Business Administration from Purdue University, was an avid Buffalo Bills and NY Yankees fan. Larry enjoyed bowling, hunting, antiques, coins, and flea markets. He loved tending to his garden. Lawrence is the husband of Arlene (Heier) Bordonaro of Batavia. The two were married January 31, 1959. Surviving along with his wife are his children, Christina (Greg) Johnson of Caledonia, Alyce (Mark) Clark, and Steen Bordonaro both of Batavia; grandchildren, Matthew and Tyler Hoye, Dustin, Dylan, Bryce, and Chase Bordonaro; a great-granddaughter, Rowan Bordonaro; a brother, James (Sandra) Bordonaro of Niagara Falls; a sister JoAnn (late Larry) Morse of Framingham, Mass. Several nieces, nephews, and cousins also survive. Larry is preceded in death by a son, Frank Bordonaro; and a sister, Carol Bordonaro. There will be no visitation. A private Mass of Christian Burial will be held at Resurrection Parish. Larry will be laid to rest in St. Joseph's Mausoleum. In lieu of flowers, those wishing may make memorial contributions to the Bordonaro Family. Arrangements for Larry were entrusted to the H.E. Turner & Co. Funeral Home in Batavia. Please leave a condolence, share a story, or light a candle at www.bataviafuneralhomes.com.

Batavia - Lawrence Bordonaro, 84 of Batavia, passed away on Wednesday, (February 10, 2021) at Premier Genesee Center for Nursing and Rehabilitation in Batavia. Larry was born April 27, 1936 in Batavia, a son of the late Frank and Dorothy... View Obituary & Service Information

The family of Lawrence Bordonaro created this Life Tributes page to make it easy to share your memories.

Batavia - Lawrence Bordonaro, 84 of Batavia, passed away on Wednesday,...

Send flowers to the Bordonaro family.