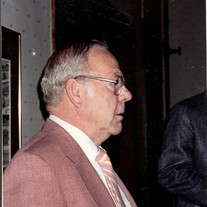 Batavia - LaVerne L. "Ben" Fisher, 85, of Batavia, passed away Thursday, (February 7, 2013) at Crossroads House, in Batavia. Mr. Fisher was born July 29, 1927 in Batavia, a son of the late Vincent and Gladys (Fullington) Fisher. Ben was an avid fisherman and woodworker. He enjoyed reading and greatly enjoyed his coffee club at Sporto's. He was a life member of Godfrey's Pond and loved spending time with his family, as well as his dogs. Those that knew him best will never forget having picnics at Godfrey's; especially, roasting hot dogs with no buns. Surviving is his wife, Beverly (Betters) Fisher, whom he married in 1951; children, Rand Fisher of Batavia, Laurie Fisher of FL, and Scott (Jodi) Fisher of Oakfield; grandchildren, Rand II and Jennifer Fisher of Batavia, Anthony and Jillian Fisher of Oakfield; his sister, Irene (late Donald) MacFayden of FL. His beloved dog, Glitter, also survives. Mr. Fisher is preceded in death by his brother, Thomas (late Helen) Fisher. Friends may call on Monday from 4 to 6 p.m. at Burdett & Sanford Funeral Home, 11 Maple Avenue, Oakfield, where Ben's Funeral Service will be held immediately following calling at 6:00 p.m. In lieu of flowers, memorials may be made to Crossroads House, P.O. Box 403, Batavia, NY 14021. Burial will be in Cary Cemetery, Oakfield.

The family of LaVerne Fisher created this Life Tributes page to make it easy to share your memories.

Send flowers to the Fisher family.