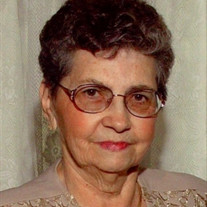 Akron - Joyce L. Wyder, 94 of Akron passed away on Monday, October 25, 2021, at the Erie County Medical Center in Buffalo. She was born on Tuesday, April 12th, 1927, in Sayre, Pennsylvania the only child of the late Earl Mattocks and Iva Ayers Mattocks. Joyce is the wife of Edward C. Wyder who passed away on January 29, 2018. Surviving are her children; Erlene K. Jordan of Pennsylvania, Francis A. (Karen) Harper of Oakfield, Cliff L. (Donna) Harper of Ohio and Thad L. (Marites) Cotter of Akron; several grandchildren and great-grandchildren also survive. She came to the Western New York area at 35 years of age with a background of sewing and tailoring. She began making clothing for the drivers at Batavia Downs and Hamburg Racetracks and word spread quickly and her clothing and designs were in demand. She worked for a few years under her personal name and then registered the name of her business as Joyce's Racing Silks. The business grew, she hired employees and later moved out of her home and added a new building to the house because of the growing demand for her goods. Her business grew to a modern factory, and she hired as many as fifteen women at one time. She was assisted by her husband, Edward, and together they went to racetracks and horse sales showing her line of clothing. Joyce became well known all over the United States and was requested overseas wherever they raced horses. Later she also worked for not only the standardbred horses but the jockeys who rode the thoroughbred horses. Joyce then branched out into other fields including snowmobile suits, bicycle racing, motocross, dirt bike and flat track motorcycle racing. There was also some special and thrilling design works with demand for using the Jockey Design Jackets for waiters and waitresses at famous restaurants in California, New York City and Florida. In 1982, she will be remembered locally for designing and building a brown Chalet building with yellow shutters and hearts opening Joyce's Doll Shop in Batavia across from McDonald's Restaurant on West Main Street Road. It grew to become the largest doll shop on the East Coast. Three years later she opened another doll shop in the place where she was born Troy, Pennsylvania. After 10 years ill health forced her to quit but she continued sewing silks in Oakfield. After 45 years of operating Joyce's Racing Silks, she retired and sold the business and name to one of her first employees who had been with her for over 30 years. Her company was one of four companies doing this work in the United States. Upon her retirement, Joyce went back to crocheting, which was her hobby, spending time with her family, children, and grandchildren. There are no prior calling hours. Private graveside services will be held at the convenience of the family at Grand View Cemetery. In lieu of flowers, memorials may be made to the charity of the donor's choice, American Diabetes Association, P.O. Box 7023, Merrifield, Virginia 22116-7023 or the Arthritis Foundation-Buffalo Branch, P.O. Box 1094, Buffalo, New York 14226. Joyce struggled with both diabetes and arthritis for many years.

Akron - Joyce L. Wyder, 94 of Akron passed away on Monday, October 25, 2021, at the Erie County Medical Center in Buffalo. She was born on Tuesday, April 12th, 1927, in Sayre, Pennsylvania the only child of the late Earl Mattocks and Iva... View Obituary & Service Information

The family of Mrs. Joyce L. Wyder created this Life Tributes page to make it easy to share your memories.

Send flowers to the Wyder family.