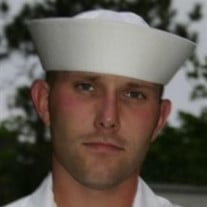 Virginia Beach/Oakfield - Jason Paul Esten, 41 of Virginia Beach, VA and formerly of Oakfield, passed away suddenly on Tuesday, (May 18, 2021) at his home in Virginia Beach. Jason was born April 19, 1980 in Batavia, the son of Carol Anne Esten of Oakfield. Jason joined the United States Navy in December of 2000 and served honorably until April of 2021. He was so proud of his years of service and even prouder when he earned the rank of Chief Petty Officer. He coached his daughter Brianna, in many sports as she was growing up. Jason had a love for the New York Yankees, Buffalo Bills, and fishing and hunting; but his greatest love was for his daughters, Brianna Jace and Brooklyn Autumn, both of North Carolina. Besides his mother and daughters, he is survived by the mother of his children, Miranda (Moulton) Esten of North Carolina; his grandmother, Harriet L. Esten; uncles, Ralph, Doug, and Roger (Lisa) Esten; an aunt, Margie Newton; a very special cousin he thought of as a brother, Ralph (Michelle) Esten, Jr; and his father-in-law, Greg Moulton of Brunswick, ME. Also survived by his close friends, Shawn and Alicia Palmer and their two sons. Jason had a wonderful gift of embracing all that he meant and he had the greatest gift of telling stories and making you laugh. He had a special bond with all his cousins, Michelle (David) Purcell, Danielle Esten, Melissa Esten, Amanda (Jack) Hanson, Stephanie Esten, Krissy (Jeff) Maxwell, Andrew Esten, Kyle Esten, Erica Esten, and LaRissa Miller. Jason was preceded in death by his grandfather, Roger Esten, Sr., an aunt, Laurie Esten, and an uncle, Mark Newton. Family and friends are invited to call on Tuesday, (May 25, 2021) from 3 to 8 pm at Burdett & Sanford Funeral Home, 11 Maple Avenue, in Oakfield. Jason's Funeral Service will be on Wednesday at 11 am at the funeral home. Burial in Western New York National Cemetery, will be private. In lieu of flowers, memorials may be made to Wounded Warrior Project, P.O. Box 758516, Topeka, Kansas 66675-8516, or to a veteran's charity of your choice. Please leave a condolence, share a story, or light a candle at www.bataviafuneralhomes.com. Fair winds and following seas to AMC Jason Paul Esten. We will forever miss you.

Virginia Beach/Oakfield - Jason Paul Esten, 41 of Virginia Beach, VA and formerly of Oakfield, passed away suddenly on Tuesday, (May 18, 2021) at his home in Virginia Beach. Jason was born April 19, 1980 in Batavia, the son of Carol Anne Esten... View Obituary & Service Information

The family of Jason Paul Esten created this Life Tributes page to make it easy to share your memories.

Send flowers to the Esten family.