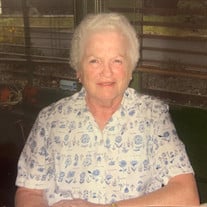 Janet M. Anderson, 80, of Batavia, passed away on Wednesday, April 14, 2021 at her home under the care of her loving family and HomeCare and Hospice. Janet was born November 15, 1940 in Watertown, a daughter of the late Lawrence "Bud" and Loretta (Boucher) Delaney. Janet was an active member of Resurrection Parish with her faith being very important to her. She was a lector at St. Mary's Church and in the 1990's Janet made all the church banners and the nativity scene that was also displayed at St. Mary's Church. She was an avid New York Yankees fan and along with her husband Charles, they celebrated their honeymoon and 50th wedding anniversary at Yankees Stadium. Janet loved her grandchildren, carpentry, sketching and painting. She will be remembered for making her family and friends the best peanut butter fudge and she graduated from Immaculate Heart Academy in Watertown. Surviving are husband, Charles Anderson, they were married August 24, 1963. Also surviving are her children, Fr. Lawrence Anderson of Albany, Laura Lee (Steven) Schertler of Silver Springs, MD, James (Patricia) Anderson of Lockport, Jeffrey (Michelle) Anderson of Cheektowaga and Michael (Korinne) Anderson of Batavia; grandchildren, Kelly Anderson, Scott Anderson, Jeffrey Anderson, Zachary Anderson, Aidan Anderson and Ava Anderson; sisters, Sally (Dick) Ulmen of Watertown, Carol Cring of Ticonderoga and Jane (Thomas) Broedel of Ocala, FL and several nieces and nephews. Preceded in death by brothers, Richard Delaney and Thomas Delaney and her sister, Mary Timlick. Calling hours are Monday from 4:00 pm to 7:00 pm at the H.E. Turner & Co. Funeral Home, 403 East Main Street, Batavia. Janet's Funeral Mass will be held at 10:00 am on Tuesday at Resurrection Parish, 18 Ellicott Street, Batavia. She will be laid to rest in the Western New York National Cemetery in Corfu. In lieu of flowers, memorials may be made to St. Jude Children's Research Hospital, 501 St. Jude Place, Memphis, TN 38105 or online at www.stjude.org/. The funeral home and church capacity are limited to 50% capacity and face coverings will be required. Thank you for your cooperation.

Janet M. Anderson, 80, of Batavia, passed away on Wednesday, April 14, 2021 at her home under the care of her loving family and HomeCare and Hospice. Janet was born November 15, 1940 in Watertown, a daughter of the late Lawrence "Bud" and Loretta... View Obituary & Service Information

The family of Janet M. Anderson created this Life Tributes page to make it easy to share your memories.

Send flowers to the Anderson family.