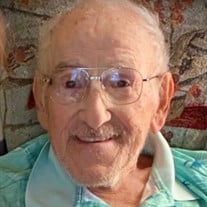 Elba - Irel Dean Boyce, age 87, of Elba passed away on Friday, October 16, 2020 at Hildebrandt Hospice Care Facility in Rochester surrounded by his loving family. Mr. Boyce was born October 25, 1932 in Elba, a son of the late Benjamin Boyce and Ogreta Frens Boyce. A retiree from Graham Manufacturing after over 30 years of employment, Dean was an Army Veteran who proudly served his country during the Korean War. The former mayor of the Village of Elba, he was a fan of the Buffalo Sabres, New York Yankees and Buffalo Bills. He enjoyed spending time in his garden, attending his great-grandchildren's sporting events, playing golf, baking and visiting the children of the neighborhood who lovingly called him "Papa Dean". Surviving are his wife of 60 years, Shirley Ann Kipfer Boyce of Elba; his daughter, Marcy (Nicholas) Colantonio of Stafford; two sons; Scott (Michelle) Boyce of Churchville and Christian Boyce of Elba; his granddaughter; Rita (Sam) Vigiano of Elba; great-grandson, Mason Vigiano of Elba; step-granddaughter; Teresa (Ronald) Tobolski of Oakfield, New York; step-great-grandchildren; Jordyn, Kara and Hunter Tobolski of Oakfield; step-grandchildren; Jordan Croston of Churchville and Krysta (Eric) Nardone of West Henrietta; his brother; Roland (Gloria) Boyce of Pavilion, New York. He is also survived by nieces, nephews, great-nieces, great-nephews, great-great-nieces and great-great-nephews. He is predeceased by eleven brothers and sisters. There are no prior visiting hours. Private services will be held at the convenience of the family. Burial, with military honors, will be held in Maple Lawn Cemetery in Elba. In lieu of flowers, memorials may be made to Hildebrandt Hospice Care Center, in care of Rochester Regional Foundations, 330 Monroe Avenue, Suite 400, Rochester, New York 14607.

The family of Mr. Irel Dean Boyce created this Life Tributes page to make it easy to share your memories.

Send flowers to the Boyce family.