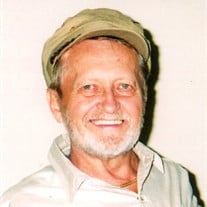 Batavia - Henry I. Larson, age 79, of Batavia, went home to the loving arms of his savior Jesus Christ on Tuesday, December 22, 2020 at the Buffalo VA Medical Center in Buffalo, New York. Mr. Larson was born Saturday, February 8th, 1941 in Niagara Falls, a son of the late Eric and Mary Estella Adrian Larson. He attended Niagara Falls High School and the Columbia School of Broadcasting. He joined the United States Army in 1958, completing his basic training at Fort Dix, New Jersey. He was transferred to Fort Leonard Wood in Missouri for combat engineer training. He joined the Paratroopers in 1959 at Fort Bragg, North Carolina and served in Germany during the Berlin Crisis when the Berlin Wall was erected. He was the co-founder and president of Batavia Channel 14 radio club, Free and Accepted Masons, Landmark Lodge in Niagara Falls, a lifetime member of the VFW Post No. 1602 and Disabled American Veterans, Batavia American Legion and the Loyal Order of the Moose, #1132 in LeRoy. He was the first president of the 400 Towers resident council and a member of the Batavia Housing Authority board of directors. He drove tractor trailer for 35 years beginning with Tyler truck lines of Oakfield and ending his career with Cummings & Bricker of Batavia. During his 35 years, he drove over 3 million miles over 48 states, Canada and Mexico. He is survived by his wife of 40 years, Patricia Tozer Larson; daughters, Dawn Larson (Randy) Piazza, Darlene Larson (Scott) Watson, Teresa “Trixie” Phelan (Ray) Eighmey; sons; Carl Eric (Suzie) Larson, Jason Eugene Phelan and David (Aaron) Larson; fourteen grandchildren; thirteen great-grandchildren; one sister and many nieces and nephews. He is predeceased by three sisters and one brother. There are no prior calling hours. Private services will be held at the convenience of the family. Burial, with military honors, will be held at Grand View Cemetery. Memorials may be made to the family in care of Patricia Larson.

The family of Mr. Henry I. Larson created this Life Tributes page to make it easy to share your memories.

Send flowers to the Larson family.