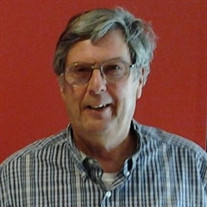 Oakfield - Hendrik Albert Jurian “Henry” "Henk" Oldenhuis, 72 of Oakfield passed away on Friday, January 28, 2022 at Buffalo General Hospital. Henry was born Saturday, April 2nd, 1949 in The Hague, Netherlands a son of the late Lammert Oldenhuis and Dirksje de Vries Oldenhuis. He immigrated to Elmira in 1957 with his family and graduated from Southside High School in Elmira in 1967 and regularly attended the class reunions.He enjoyed keeping in contact with his classmates. He served with the United States Army as a military policeman from 1969-1971. He worked for Eastman Kodak for 19 years and most recently as a security guard with Graham Corporation in Batavia, NY He loved watching sports on television, NASCAR was his favorite. He enjoyed woodworking and had an ability to handcraft homemade furniture. He also enjoyed the beauty of the outdoors. He is survived by his wife, Sandra Sebura Oldenhuis; his son, Dan (Molly) Oldenhuis of Omaha, Nebraska; siblings, Bert (Marion) Oldenhuis of The Hague, Netherlands, Willem Oldenhuis of Virginia, Corrie Dotson of Texas and Jantina (Ken) Mann of West Virginia; his brother-in-law, Steve Josephson of Virginia and several nieces and nephews survive. He is predeceased by his brother, Jan (late Hennie) Oldenhuis, his twin sister, Marianne Josephson and his brothers-in-law, George Dotson and Alex Glinski. There are no prior calling hours. Memorial services will be held on Saturday, April 2, 2022 at 11 am at The Elba Baptist Church, 31 South Main Street, Elba. He will be laid to rest in Western New York National Cemetery on Monday April 4, 2022 at 11 am. In lieu of flowers, memorials may be made to Volunteers for Animals, P.O. Box 1621, Batavia, New York 14021.

The family of Mr. Hendrik Albert Jurian Oldenhuis created this Life Tributes page to make it easy to share your memories.

Send flowers to the Oldenhuis family.