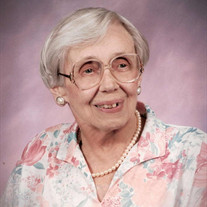 North Chili - Mrs. Helen Baker Scribner, 101, of North Chili, former substitute teacher in the Batavia School District and former music teacher for the Fultonville School District, passed away on Monday at Westwood Commons in North Chili. Mrs. Scribner was born March 31, 1912 in Dalton, the daughter of the late Fred and Florence Gelser Baker. She graduated from Houghton College in 1933 with a Bachelor of Arts in Music Education. She was a member of the inaugural class of the college's music education degree program. An active member of the First United Methodist Church of Batavia, she was a member of the Ingraham Class, United Methodist Women and participated in the church's circle groups which focused on bible study and service. She was a member of the Genesee County Historical Association and was an avid bird-watcher and gardener. She married William F. Scribner on October 4, 1943 during World War II. He passed away in 1979. She is survived by her three sons; twin sons, David (Mary Kay) Scribner of North Chili and Dean (Holly) Scribner of Arlington, Virginia and Donald (Grace) Scribner of Tampa, Florida; eight grandchildren, Heather Doche of Fairport, Hillary Finder of Ogden, Utah, Brandon Scribner of Fairport, Justin Scribner of New York City, Garen Scribner of San Francisco, California, Jeffrey Scribner of Atlanta, Georgia, Brian Scribner of Orlando, Florida and Gloria Scribner of Tampa, Florida; two great-granddaughters, Emerson Scribner and Violet Scribner and several nieces and nephews. Friends may call on Sunday from 2 to 3 p.m. at the First United Methodist Church of Batavia, 8221 Lewiston Road, Batavia, where her funeral service will follow at 3 p.m. In lieu of flowers, please consider memorials to the memorial fund at the First United Methodist Church of Batavia, 8221 Lewiston Road, Batavia, New York 14020. Burial will be in Hunt Hollow Cemetery, Hunt.

The family of Helen Scribner created this Life Tributes page to make it easy to share your memories.

Send flowers to the Scribner family.