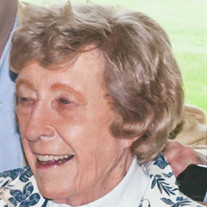 LeRoy – Helen B. Church, 96, died in her home at St. Ann’s Community at the Greens in LeRoy on Tuesday, May 4, 2021 following a long illness. Mrs. Church was born on September 5, 1924 in Batavia, a daughter of the late Clarence L. and Marion Annabal Buchholtz. She graduated from Batavia High School in 1940, earned an associate degree from LaSell Junior College in 1942, and received her RN degree from the University of Rochester School of Nursing in 1945. Mrs. Church worked as a nurse at Genesee Memorial Hospital and later was a director of The Homemakers Service in Genesee County. She also worked in the social services departments at the Batavia Nursing Home and Genesee Memorial Hospital. Mrs. Church and her husband Maynard were long-time residents of Stafford on the Fargo Road in the house they built. She was active in St. Paul’s Episcopal Church (Stafford) for decades. She also was involved in voter services, had been a member of the former Conversation Class of Batavia, played bridge avidly and supported many community efforts as a volunteer throughout her life. Most importantly, Mrs. Church unfailingly and unselfishly gave her time and energy to her family and friends, showing a genuine concern for everyone. She is survived by her daughter, Charlotte Church and son-in-law Jonathan Gaines of Bronxville, NY; two step-granddaughters, Rebecca Lucas (Chris) and Laura Jofre (Jaime); and nieces and nephews Lawrence Schultz (Melissa), Caroline Schultz, Rick Church (Eileen), Tom Church (Sheri), Ann Richards (Gary Mirando), S. Grant Richards (Suzy), and John Willand (Peggy Carter). Mrs. Church was predeceased by her husband, Maynard; her sister, Charlotte Schultz; and her nephew, Peter Schultz. A memorial service will be held at 11 a.m. Saturday, May 22nd at St. Paul’s Episcopal Church, 6188 Route 5, Stafford. Burial will be in Grand View Cemetery. Memorials may be made to St. Paul’s Episcopal Church, 6188 Route 5, Stafford, NY 14143 or United Memorial Medical Center Foundation, 127 North Street, Batavia, NY 14020.

The family of Mrs. Helen B. Church created this Life Tributes page to make it easy to share your memories.

Send flowers to the Church family.