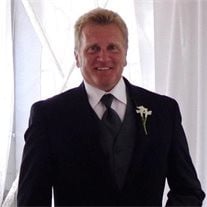 Harry R. Mieney Byron - Mr. Harry R. (Skip) Mieney, 51, of Byron, engineer at Delphi Corp in Rochester, died Monday, December 3, 2012 at United Memorial Medical Center, in Batavia. Mr. Mieney was born May 14, 1961 in Buffalo, a son of Harry J. and Mary Jane (Pieczynski) Mieney, both of Elma. He graduated in 1982 from the University of Buffalo with a Bachelor of Science degree and was a member of Crosspoint Church in Hilton where he served on the worship team. He enjoyed playing the drums, riding his Harley Davidson, hiking, working on various projects, working out and especially enjoyed his family. Along with his parents, he is survived by his wife, Darlene (Stone) Mieney, whom he married April 27, 1984; 3 sons, Chris (Rachel) Mieney of Rochester, Nick Mieney and Tim Mieney, both of Byron, a brother, Michael (Laura) Mieney of Angola; a sister, Michelle Rose of Elma; several nieces and nephews. Friends may call on Thursday from 4 to 7 p.m. at H.E. Turner & Co. Funeral Home, 403 E. Main St., Batavia. Services will be at 11 am, Friday, at Northgate Free Methodist Church, 8160 Bank St. Road, Batavia. In lieu of flowers, memorials may be made to Crosspoint Church, 1021 Hilton Parma Corners Rd, Hilton, NY 14468.

The family of Harry "Skip" Mieney created this Life Tributes page to make it easy to share your memories.

Send flowers to the Mieney family.