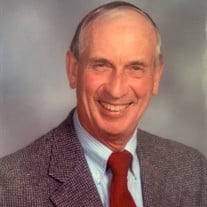 Batavia, NY- Harold E. Nesbitt, 91, passed away on February 3, 2022. Harold was born on June 2, 1930 to the late Richard and Marian (Heintz) Nesbitt of Batavia. He is survived by his wife of 65 years, Nan, and 2 sons, David Nesbitt of Pavilion and Thomas (Melanie) Nesbitt of Byron and a grandson, Connor Nesbitt of Vermont as well as nieces and nephews. In addition to his parents, Harold was pre-deceased by sisters, Virginia Mericle and Dorothy Nesbitt, brother, Paul Nesbitt, Sr., father and mother-in-law Howard M. and Myrtle Killian, brother-in-law, Howard R. (Judy) Killian, niece, Linda Mericle and nephew, Steven Nesbitt. Harold graduated from Batavia High School in 1948 and joined the Navy shortly after. Upon returning home from service, Harold worked for the U.S.P.S. in Batavia as a letter carrier until his retirement. He then became a full time carpenter and you could find him doing odd jobs for people all over western NY. Harold was a Cub Scout leader for many years at the First Methodist Church in Batavia, Pack 6. He also loved to travel and hiked almost all of the Appalachian Trial. Harold was a member of the Morganville United Church of Christ. Calling hours will be held on Saturday, April 9 from 9:30 a.m. to 10:00 a.m. at the Morganville United Church of Christ, 8466 Morganville Road in Stafford, where Harold's Memorial Service will be held at 10:00 a.m. also on Saturday. He will be laid to rest with military honors in Grandview Cemetery, Batavia. At the conclusion of the services at Grandview Cemetery, all are invited to a reception at the Morganville United Church of Christ in the fellowship hall. In lieu of flowers, memorials may be made to Genesee County Animal Shelter, 3841 West Main Street Road, Batavia, NY or Morganville United Church of Christ, 8466 Morganville Road, Stafford, NY 14143

The family of Harold E. Nesbitt created this Life Tributes page to make it easy to share your memories.

Send flowers to the Nesbitt family.