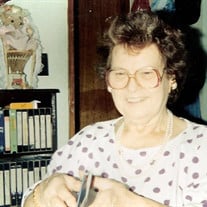 Byron - Gurelda Ruth Greenman, 89, of Byron, passed away Sunday, (March 3, 2013) at United Memorial Medical Center, in Batavia, following a brief illness. Mrs. Greenman was born December 12, 1923 in Corning, a daughter of the late George and Clara Mae (Kellogg) Waggoner. Ruth was a member of the First Baptist Church of LeRoy. She was an avid bingo player and greatly enjoyed playing cards. She loved animals and spending time with her family and friends. Ruth was a caring person, and would go out of her way to help those less fortunate. She liked to listen to records and in her younger years, she enjoyed dancing. She is the wife of the late George H. Greenman, Sr., who passed way in 1990. Surviving are her children, George (Vicki) Greenman, Jr. of Batavia, Shirley Greenman of Elba, and Dorothy Calkins of Byron. 5 grandchildren, 7 great-grandchildren, a sister, Cindy (Bob) Teeter of Dansville, as well as several nieces and nephews also survive. Ruth is preceded in death by her siblings, Charles Waggoner, Margaret (late Art) Kiefer, Treva (late Fred) Holbrook, Helen (late Pete) Losey, and Martha Garrison. Friends may call on Thursday from 4 to 8 p.m. at H.E. Turner & Co. Funeral Home, 403 East Main Street, Batavia, where Ruth's Funeral Services will be at 11:00 a.m., Friday, (March 8, 2013). In lieu of flowers, memorials may be made to the family. Burial will be in Byron Cemetery, Byron.

The family of Gurelda Greenman created this Life Tributes page to make it easy to share your memories.

Send flowers to the Greenman family.