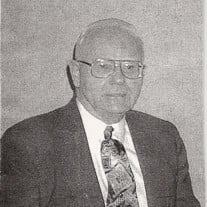 Bergen - Glenn W. Lawrence, 89, of Bergen, an auctioneer at Harris Wilcox, Inc, in Bergen until his retirement, passed away on Saturday, March 30, 2013 at United Memorial Medical Center, in Batavia. Mr. Lawrence was born April 5, 1923 in Fargo, NY, a son of the late Harold and Gertrude (Torrey) Lawrence. Glenn was a Genesee County 4-H Champion Holstein Boy of New York State in 1941, was a member of the Young Cooperators of the Dairymen's League in Genesee County, the Corfu Grange for 60 years, Outstanding Young Farmer of New York in 1957, was active in many community and farm organizations including Director of the New York State Holstein Association and Dairy Herd Improvement Association. He was President of the Genesee County Dairymen's League, Chairman of the Farm Bureau Extension, served on the Genesee County Fair Board for 25 years and Pembroke Board of Education for 9 years. He was the sales manager and auctioneer for Harris Wilcox Inc. for 40 years, and member of the North Darien Baptist Church where he served as choir member, deacon, trustee and Sunday School Superintendent. He was also a member of the First Presbyterian Church of Bergen where he served as a choir member. His wife, Marge W. (Woodruff) Lawrence, died August 2, 2004. There were married on December 4, 1943. Survivors include 3 daughters: Carol (Thomas) Sprague of GA, Sandra (Dr. Edward) Pierce of OK and Betty (David) Dunbar of GA; a son: Rev. Dr. Kenneth (Dr. Connie) Lawrence of NH; 2 sisters: Dorothy Basom of CA, Jean Hill of NY; 12 grandchildren, 11 great-grandchildren and several nieces and nephews. He was the brother of the late Ralph Lawrence. Friends may call on Wednesday from 4 to 7 p.m. at H.E. Turner & Co. Funeral Home, 51 S. Lake Street, Bergen. Services will be at 1 p.m. Thursday at First Presbyterian Church of Bergen, 38 S. Lake Street, Bergen. In lieu of flowers, memorials may be made to Bergen First Presbyterian Church, P.O. Box 206, Bergen, NY 14416. Burial will be in Evergreen Hill Cemetery, Corfu.

Bergen - Glenn W. Lawrence, 89, of Bergen, an auctioneer at Harris Wilcox, Inc, in Bergen until his retirement, passed away on Saturday, March 30, 2013 at United Memorial Medical Center, in Batavia. Mr. Lawrence was born April 5, 1923 in... View Obituary & Service Information

The family of Glenn Lawrence created this Life Tributes page to make it easy to share your memories.

Send flowers to the Lawrence family.