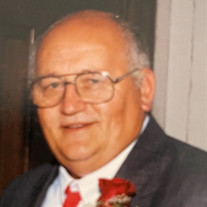 Batavia - Gerald E. Good, 79 of Batavia, passed away on Sunday, March 28, 2021 at his home under the care of HomeCare & Hospice surrounded by his loving family and friends. He was born September 27, 1941 in Batavia, a son of the late Raymond Good and Beatrice Sprague Good. Jerry worked for many years in the local farming community. He began at MY-T Acres in Oakfield where he worked for seven years. Following his time there he owned and operated a dairy farm in Alexander while working for the New York State Department of Corrections in Attica for 14 years. Following his retirement from Attica Prison he drove tractor trailer for Path Truck Lines in Oakfield where received numerous awards for being a safe driver. He also drove tractor trailer for Del Mar Farms, Inc. in Pembroke and milked cows part time for Baker Brook Dairy in Attica. A 1959 graduate of Alexander Central School, Jerry was a member of the Alexander United Methodist Church and was a lifetime social member of the Alexander Fire Department. Jerry was very mechanically inclined and enjoyed working on cars. He loved to farm and had a great adoration of animals. His greatest love was his family especially being with his grandchildren and great-grandchildren. Jerry is the husband of Charlene M. Fohl Good. They were married on April 1, 1967. He is also survived by his children; Darlene (Kevin) Raines of Alexander, Gerald (Diane) Good, Jr. of Batavia, Gary (Donna Geitner) Good of Batavia, Jason (Brenda Zeches) Good of Wyoming, Jeffrey (Deana Hollman) Good of Dunkirk, Sandra Good of Gates, Heather (Michael) Klein of Pavilion and Brenda (Sue Hurlbut) Good of Batavia; sixteen grandchildren; sixteen great-grandchildren; his brothers; Richard (Alice) Good of Hurst, Texas and Larry (Susan) Good of Alexander along with several nieces and nephews. He is predeceased by his first wife, Marie Marconi Good who passed away on November 9, 1966; his son, John B. Good; grandsons, Jacob, Dustin and Matthew Good and his sisters; Judy Good, Janet Radley and Anita Wight. Family and friends are invited to call on Friday, April 2nd, 2021 from 5:00 pm to 8:00 pm at H.E. Turner & Co. Funeral Home, 403 East Main Street, Batavia. Jerry's funeral service will be held at 1:00 pm on Saturday, April 3rd, 2021 at the Alexander United Methodist Church, 10540 Main Street, Alexander followed by burial in Mount Pleasant Cemetery, Alexander. In lieu of flowers, memorials may be made to HomeCare & Hospice, 29 Liberty Street, Suite #6, Batavia, New York 14020, Alexander United Methodist Church, 10540 Main Street, Alexander, New York 14005 or Volunteers for Animals, P.O. Box 1621, Batavia, New York 14021. Please note funeral home and church occupancy are limited to 50%. Facial coverings and social distancing are expected. We thank you for your cooperation and consideration.

Batavia - Gerald E. Good, 79 of Batavia, passed away on Sunday, March 28, 2021 at his home under the care of HomeCare & Hospice surrounded by his loving family and friends. He was born September 27, 1941 in Batavia, a son of the late Raymond... View Obituary & Service Information

The family of Mr. Gerald E. Good created this Life Tributes page to make it easy to share your memories.

Send flowers to the Good family.