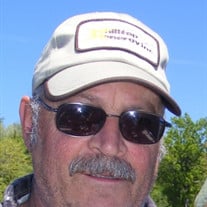 Macomb/Zephyrhills - Gerald G Elliott, 73 of Macomb, New York and Zephyrhills, Florida and formerly of Corfu, passed away on December 22, 2020 at Advent Health in Zephyrhills. Mr. Elliott was born December 1, 1947 in Batavia, a son of the late George and Evadene (Wiltse) Elliott. He was a 1967 graduate of Pembroke High School. Following high school, he enlisted in the Army, where he served honorably during the Vietnam War. Gerald was a member of the Akron Masonic Lodge, the Shriners, American Legion, VFW, and the Elks Club. He retired in 2010 after 36 years as a heavy equipment operator with County Line Stone. Mr. Elliott enjoyed landscaping, hunting, fishing, spending time with family and friends, and traveling between Black Lake and Florida. Surviving are his children, Steven Elliott of Corfu, Michelle Czechowicz of Lockport, and Amanda Elliott of Basom; grandchildren, Bryce, Kristen, Jason, Amarri, Journie, Giara, and Isaiah; his companion, Pai, of Florida; siblings, Reylene (late George) VanGeldren of Fishkill, Gayle (Dennis) Waldron of Byron, Lee (Bonnie) Schoenthal of Corfu, and Ila Jean (late John) Terry of Hammond. Nieces, nephews, and cousins also survive. Family and friends are invited to call on May 22, 2021 from 1:00 pm to 2:00 pm at H.E. Turner & Co. Funeral Home, where a Masonic Service and Memorial Service will immediately follow at 2:00 pm. Gerald will be interred in the Western New York National Cemetery in Corfu at a later date. In lieu of flowers, memorials may be made to a charity of the donor's choice. Please leave a condolence, share a story, or light a candle at www.bataviafuneralhomes.com.

Macomb/Zephyrhills - Gerald G Elliott, 73 of Macomb, New York and Zephyrhills, Florida and formerly of Corfu, passed away on December 22, 2020 at Advent Health in Zephyrhills. Mr. Elliott was born December 1, 1947 in Batavia, a son of the... View Obituary & Service Information

The family of Gerald G Elliott created this Life Tributes page to make it easy to share your memories.

Send flowers to the Elliott family.