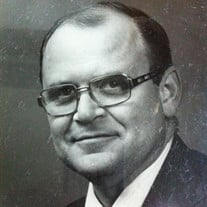 Gary L. Johnson Batavia - Gary L. Johnson, 73, of Batavia, head of the Consumer Relations Dept. at the former Niagara Mohawk Power Co in Batavia, prior to his retirement in 1993, died Monday, July 30, 2012 at United Memorial Medical Center, in Batavia. Mr. Johnson was born December 29, 1938 in Erie, PA, a son of the late Howard and Gladys (Ford) Johnson. He served with the Air Force, was a member of St. James Episcopal Church and was known for his beautiful gardens. Earlier in his life, enjoyed fishing and hunting. He is survived by his wife, Carol S. (Smith) Johnson, whom he married on August 29, 1964; a son, Aaron David (Valerie) Johnson of Attica and a grandson, Aaron David Johnson, Jr. of Attica; a brother, Terry (Linda) Johnson of Erie, PA; several nieces and nephews. There are no calling hours. Services will be scheduled at a later date. In lieu of flowers, memorials may be made to St. James Episcopal Church, 405 East Main Street, Batavia, NY 14020. Burial will be in Heartland Cemetery in Niagara County. Arrangements were entrusted to H.E. Turner & Co. Funeral Home, 403 E. Main St., Batavia.

The family of Gary Johnson created this Life Tributes page to make it easy to share your memories.