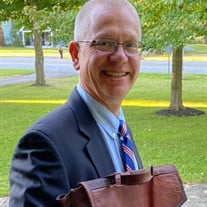 Stafford – Garth Paul Swanson, age 57, passed away on Wednesday, January 5, 2022 at his home surrounded by his loving family. Garth was born on January 18, 1964, in Jamestown, a son of the late George H.K. Swanson and C. Mercedes Ecklund Swanson. A 1982 graduate of Jamestown High School, Garth received his Associates Degree from Jamestown Community College, his BA in History from St. Bonaventure University and his MA in History from Ohio University. Garth was a professor at Genesee Community College since 1992 and in 2004 joined the faculty in the Social Science Department teaching History. He earned Chancellor's Awards in Faculty Service and Excellence in teaching receiving the NISOD Award for Excellence in Adjunct teaching. This March, Garth would have celebrated his 30th year teaching at Genesee Community College. In the summer months, he served as a consultant for the Advanced Placement Services, grading AP History Exams. Garth was most in his element in front of a classroom full of students. His love for teaching history was evident in his classroom style. He taught with an infectious energy bringing history to life, often acting out historical events. You might pass his classroom and see him standing on a chair or expressing an idea with his hand stretched out as his teaching style was very animated. He loved seeing the lightbulb go off in a student’s eyes and that “aha” moment when they understood and made historical connections. Garth served as the Town of Stafford Historian, was a member of The Stafford Historical Society, Vice-President of the Stafford Rural Cemetery Association and was a member of the Holland Purchase Historical Society. Garth enjoyed camping, cycling, hiking and spending time at Lake Chautauqua Lutheran Center. Garth was a huge fan of the Chicago Cubs and was very proud of his Swedish Heritage. Although born and raised at Immanuel Lutheran Church in Jamestown, Garth quickly found a home at St. Paul’s Episcopal Church in Stafford where he was married, had his sons baptized and watched them grow. He loved his sons with a ferocious passion; fighting for them at every turn. He was exceptionally proud of the men they were becoming. He was a tireless advocate for those in need; always believing that the right thing must be done. He used his gifts and passion always in the service of others. Garth enjoyed raising money and bring awareness to childhood cancer; speaking at many events for Golisano Children’s Hospital and Camp Good Days. They loved his annual participation in the Tour de Teddi cycling around Keuka Lake. He is survived by his wife, Amy Swanson; his sons, Anders Swanson, Beckett Swanson and Cooper Swanson, all at home; his brothers, Kevin Swanson of Frewsburg and Mark (Laura Csellak) Swanson of Jamestown; mother-in-law and father-in-law, Linda (Gerald) Call of Stafford; his aunt, Millicent Atkins of Byron, his uncle, Curt (Jeanne) Ecklund; nieces, nephews and cousins. Garth is also survived by special friends who are like family Christine, Tim, Tore, Dave, Grandma Lois, Larry, Laurel, Kevin and his AP grading crew and his beloved GCC family. His family wishes to extend special thanks to Peggy Weissend, RN and Sara Schaffer, NP for their amazing care given to Garth and his family. Friends may call on Friday, January 14, 2022 from 4 pm to 7 pm at St. James Episcopal Church, 405 East Main Street, Batavia, where his funeral service will be held at 10:30 am Saturday, January 15, 2022. Although his family hoped to have services at their church in Stafford, it is important to make sure they can ensure social distancing while celebrating Garth’s life. He will be laid to rest in Stafford Rural Cemetery. In lieu of flowers, please consider memorials in Garth’s name to Lake Chautauqua Lutheran Center, Inc. (LCLC) 5013 Route 430, Bemus Point, NY 14712, Camp Good Days & Special Times P.O. Box 665 Mendon, NY 14506 or St. Paul’s Episcopal Church, P.O. Box 786, Stafford, NY 14143. Please note masks will be required for all services and social distancing is strongly encouraged by Garth’s family.

Stafford &#8211; Garth Paul Swanson, age 57, passed away on Wednesday, January 5, 2022 at his home surrounded by his loving family. Garth was born on January 18, 1964, in Jamestown, a son of the late George H.K. Swanson and C. Mercedes Ecklund... View Obituary & Service Information

The family of Mr. Garth Paul Swanson created this Life Tributes page to make it easy to share your memories.

Send flowers to the Swanson family.