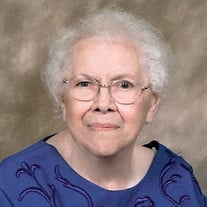 Batavia - Florence E. Bernard, 94, of Batavia, passed away Friday, (April 6, 2012) at the New York State Veteran's Home, in Batavia, following a lengthy illness. Mrs. Bernard was born February 11, 1918 in Batavia, a daughter of the late John E. and Olive (Boyce) Dietschler. She was the longest surviving member of the First Presbyterian Church of Batavia, having joined in 1932. Florence was the site manager of the former Batavia Senior Center for more than 20 years; and was the Mission Chairperson for the Presbyterian Women of Batavia. She was also President of the 20/30 Club. She enjoyed volunteering her time with the American Red Cross. Mrs. Bernard was a devoted mother and grandmother. She especially enjoyed having tea parties with the numerous children in the family. She was the wife of the late William Bernard, who passed away in 1997. They were married September 30, 1938, in Batavia. Florence is survived by her children, Beverly (Paul) Kern, Jack (Norma) Bernard both of Batavia, Rev. James (Pamela) Bernard of KY, Dennis (Maria) Bernard of Miami, FL, Allyn (Linda) Bernard of Oakfield, Richard (Maria) Bernard of NC, and Barry Bernard of CA; Daughter-in-law, Mary Jane Bernard of Las Vegas, NV. 20 grandchildren, 21 great-grandchildren, and 5 great-great-grandchildren survive along with several nieces, nephews, and cousins. Mrs. Bernard is preceded in death by a son, Robert Bernard; and a grandson, Shawn Bernard.

The family of Florence Bernard created this Life Tributes page to make it easy to share your memories.

Send flowers to the Bernard family.