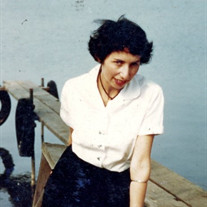 Batavia – Emma M. Ladd, age 98, of Batavia, formerly of Orangeville, NY, died peacefully Monday, March 16, 2020, at the New York State Veterans Home in Batavia.  Emma was born January 29, 1922 in Bern, Switzerland to the late Giovanni and Lina Mori, also preceded in death by grandsons, Joseph and Kevin Ladd; great-grandson Elliott Carver; great-granddaughter, Suzanne Perry; along with five brothers and sisters.   Emma was the wife of the late Wayne R. Ladd who passed away on April 21, 2019 after 65 years of marriage. Emma emigrated from Switzerland to England after WWII. She continued her education in London and also worked there for several years before moving to the United States in 1951. Attaining her US citizenship was always a source of pride for Emma. She was a former member of the Order of the Eastern Star and also the Swiss Club of Buffalo and Western New York. Thanks to her upbringing in Switzerland, Emma was a lifelong skier and bicyclist. She also greatly enjoyed gardening and choir singing. Surviving are children, Mark (Cecilia) Ladd of Batavia, Martin (Patty) Ladd of Rochester, and Mary (late Frank) Perry of Fairport, grandchildren, Frank (Kelley) Evans, Daniel Ladd, Tia Inclima, Jason Perry, Michael Perry and Jennifer (James) Carver; great-grandchildren, Walker, Hayes and Hadley Evans, Tabitha Perry, Isabell and Sierra Carver; grand-niece, Mishe (Thomas Schutlz) Stampfli; adopted sons, Lee Done and Glenn Stevens. There will be no visitation. A memorial service will be held at the convenience of the family. Mrs. Ladd will be laid to rest with her husband in White Haven Memorial Park in Fairport. In lieu of flowers, memorials are suggested to Volunteers for Animals, PO Box 1621, Batavia, NY  14021. Arrangements for Emma were entrusted to the H.E. Turner & Co. Funeral Home, 403 E. Main St., Batavia.

The family of Emma M. Ladd created this Life Tributes page to make it easy to share your memories.

Send flowers to the Ladd family.