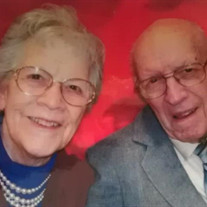 Batavia and Bergen - Emil C. "Carl" Rick, Jr., 86, of Batavia, formerly of Bergen, an electrician at Eastman Kodak Co. in Rochester, prior to his retirement, died Sunday, January 13, 2013 at New York State Veteran's Home in Batavia. Mr. Rick was born September 30, 1926 in Batavia, the son of the late Emil C. Rick, Sr. and the late B. Louise (Dietschler) Rick. He served with the US Army during World War II, and was a former member of St. Vincent de Paul Church in Churchville. He loved to dance, and met his wife while at a dance. He also enjoyed fishing, hunting and was proud to have learned to play the accordion. He is survived by his wife, Elizabeth "Anne" (Bush) Rick, whom he married June 19, 1948; a son, Michael (fiancé Patricia Latour) Rick of Greece; a daughter, Maryanne (Richard Warne) Calmes of Scottsville; 4 grandchildren and 5 great grandchildren. Friends may call on Tuesday from 3 to 8 p.m. at H.E. Turner & Co. Funeral Home, 403 E. Main St., Batavia. His Mass of Christian Burial will be at at 9:30 a.m. Wednesday at Our Lady of Mercy Parish, St. Peter's Church in LeRoy. In Lieu of flowers, memorials may be made to the family. Burial will be in Byron Cemetery, Byron.

The family of Emil Rick created this Life Tributes page to make it easy to share your memories.

Send flowers to the Rick family.