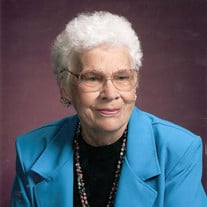 Mrs. Eleanor R. Urban Oakfield - Mrs. Eleanor R. Urban, 88, of Oakfield, died Saturday, December 22, 2012 at Medina Memorial Health Care System, in Medina. Mrs. Urban was born January 4, 1924 in Hamilton, Ontario, the daughter of the late Douglas and Mabel (King) Moodie. She was a member of the Oakfield Alabama Baptist Church, where she formerly served as a Deaconess, member of the Oakfield American Legion Auxiliary, she volunteered for several years as an AARP tax preparer, was a member of the Monday Morning Bingo Players and supporter of many animal rights groups. She enjoyed public speaking, making rice bags for friends and knitted slippers for many. "Ellie", as she was known by her friends, was always quick with a smile, had a great sense of humor and was a person who made you look on the "bright side" no matter what your situation. She loved the Lord and her friends at Oakfield Alabama Baptist Church. She is predeceased by her husband, Clyde Victor Urban, Jr., who died January 21, 1999. Survivors include 7 children, Sherry (Don) Polack, Douglas Urban, Vicki Streiff, Brian (Kris) Urban, Scott (Sandy) Urban, Wendy (Tom) Berg and Janice (Mike) Cadieux; a brother, Jack (Joan) Moodie; 28 grandchildren and many great-grandchildren. She was the mother of the late Nancy Ann Urban and sister of the late Traverse Moodie. Friends may call on Friday from 10 a.m. to 12 p.m. at Burdett & Sanford Funeral Home, 11 Maple Ave., Oakfield, where services will follow at 12 p.m. In lieu of flowers, memorials may be made to Volunteers for Animals, P.O. Box 1621, Batavia, NY 14021 or to Oakfield Alabama Baptist Church, 2210 Judge Rd, Oakfield, NY 14125 to be used to pave the church parking lot. Burial will be in Cary Cemetery.

The family of Eleanor Urban created this Life Tributes page to make it easy to share your memories.

Send flowers to the Urban family.